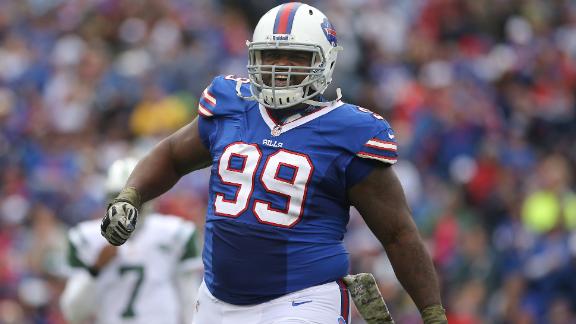 Buffalo Bills defensive tackle Marcell Dareus has been suspended for the first game of the regular season for violating the NFL's substance abuse policy, the league announced Thursday.

Dareus' suspension stems from a May 2014 arrest after a traffic stop in Alabama. He was charged with criminal possession of a controlled substance and possession of drug paraphernalia, and later entered a pretrial intervention program that allows the charges to be dropped.

Dareus' attorney, Rod Giddens, told ESPN on Thursday that Dareus is still on track to complete the intervention program and hasn't faced any setbacks in the process.

"Last year, I made a mistake involving possession of a banned substance," Dareus said in a statement. "The NFL's discipline for this conduct is part of the drug policy, and I apologize to my family, my teammates, the entire Bills organization and Bills fans that I will miss one game as a result of my mistake. I will work intensely that week and will be extremely happy to contribute to a win in week two for the Bills."

The Bills will be without Dareus, who has been selected to the Pro Bowl the past two seasons, for their season opener against the Indianapolis Colts. He will be allowed to participate in all preseason practices and games.

It will be the second consecutive season in which a Bills defensive starter will miss the opener for disciplinary reasons. The NFL suspended linebacker Nigel Bradham for the first game of last season after an August 2013 arrest for possession of marijuana.

Dareus, 25, was the third overall selection in the 2011 draft. In addition to his arrest in Alabama last May, he was arrested later that month in Hamburg, New York, on misdemeanor charges stemming from an alleged street race with teammate Jerry Hughes. Dareus reached a plea agreement last month that resulted in his paying two traffic tickets.

The Bills believe Dareus' off-field issues are behind him and are looking to extend his contract, which ends after the upcoming season.

"I think the maturity we saw this year has us feeling that unless he has a relapse soon, that we're pretty comfortable that he's taking that step for him as a professional -- to be more professional -- he's taking those steps," Bills general manager Doug Whaley told ESPN at the NFL owners meetings in March. "We're feeling pretty confident."