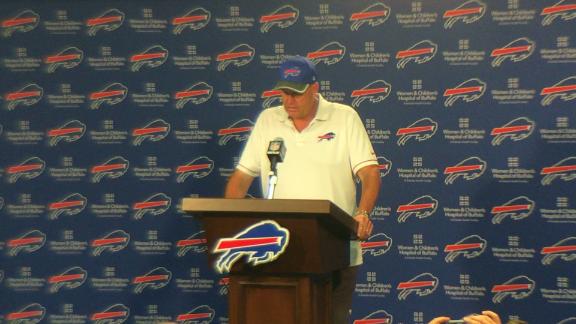 The positive test was apparently caused by a treatment for Crohn's disease. The suspension is under appeal, a source told Schefter.

Bills coach Rex Ryan wouldn't comment on specifics of the suspension, but he said the team would fill the void.

"We'll be prepared for whatever happens, obviously," he said. "For us, any time, with any situation, our board is set up to where you got the top free agents available -- whatever the situation is, through injury or whatever -- our pro personnel department is on top of it."

Henderson, 24, tested positive for marijuana at the NFL combine in 2014, a source told Schefter. He also was suspended while playing at the University of Miami for failed drug tests. Henderson's history with substance abuse caused some teams to remove him from their draft boards.

Ryan said the Bills have a program in place to steer players clear of danger.

"Well I think, first off, we're not perfect by any stretch of the imagination, but we try to provide our players with -- I think our player program department, we bring in speakers, we try to have, even through the league there's things set up," he said. "But unfortunately we've had some issues."

The Bills selected Henderson with their seventh-round pick in 2014. He started all 16 games at right tackle as a rookie and started 10 of the Bills' first 11 games last season, missing one game in October with a concussion.

Henderson missed the final five games of last season after he was diagnosed with Crohn's disease, an inflammatory condition that affects the digestive system.

The third-year tackle told The Palm Beach Post last month that he underwent surgery in January to remove 2 feet of his intestines, resulting in him losing nearly 50 pounds and having to wear an ileostomy bag until his intestines were reattached in April.

"I was weak," Henderson told the newspaper. "At first I couldn't stand up on my own. I felt so weak. It was terrible. I didn't like it at all. I kept walking and walking around the hospital."

Henderson's weight dropped to 281 following the surgery, but he regained most of his lost weight by the time he returned to practice Aug. 22. He is now on a strict diet that prevents him from eating gluten or certain vegetables.

Jordan Mills replaced Henderson in the starting lineup late last season and remains the Bills' projected starter this season. Henderson has mostly taken snaps with the second team since returning to practice.

Henderson's suspension is the team's third substance-abuse suspension since the summer. Former running back Karlos Williams was suspended four games in July and later released, while Pro Bowl defensive tackle Marcell Dareus will miss the first four games of this season for what he called a missed drug test.