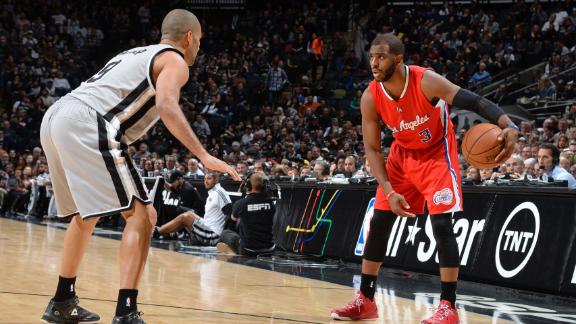 PLAYA VISTA, Calif. -- The Los Angeles Clippers finished the regular season tied for the second-best record in the Western Conference and third-best mark overall in the league, but they know where they stand in the court of public opinion entering their first-round series with the San Antonio Spurs on Sunday.

"According to pretty much every single poll we're supposed to lose," Blake Griffin said Saturday. "We're the underdogs in this. They're the champions. They're the defending champs, and they are that until someone knocks them off."


When Griffin was asked if he embraced the Clippers' unusual "underdog" role despite being the No. 3 seed and having home-court advantage against the sixth-seeded Spurs, he said, "Absolutely, 100 percent."


"There's not a lot of series that I've been a part of where we have been picked to win in my entire career," Griffin said. "As far as motivation, that's just how it is. That's how it's been. That's fine."


Doc Rivers said he plans on bringing up the fact that nearly no one is picking the Clippers in the series at some point but admitted it wouldn't make much of a difference once the games start.

"I think they know it," the Clippers' coach said. "It doesn't matter at the end of the day, but you can use it. I'll use it probably once ... 'Hey, no one thinks you're going to win.' At the end of the day, you've just got to be ready to play. All that other stuff, it sounds great, and it is, you can use it. It's always nice when an opposing player says something that gets your guys riled, but all that lasts for about 30 seconds and then you've got to finish, you've got to play the game."


The Clippers and Spurs were battling for the No. 2 seed on the last night of the season but are facing each other in a 3-6 matchup because the Houston Rockets won a tiebreaker over Los Angeles by winning the Southwest Division. The Spurs were pushed all the way down to the sixth seed because the Trail Blazers were guaranteed a top-four seed after winning the Northwest Division despite finishing with the sixth-best record in the West.


"The 3-6 as far as I'm concerned doesn't really mean a whole lot," Griffin said. "When every team is separated by one game pretty much, teams are tied and the only reason a team is ahead is because of divisions. I don't really look at it like a 3-6, as a true 3-6, it is but it's not a true 3-6 matchup."