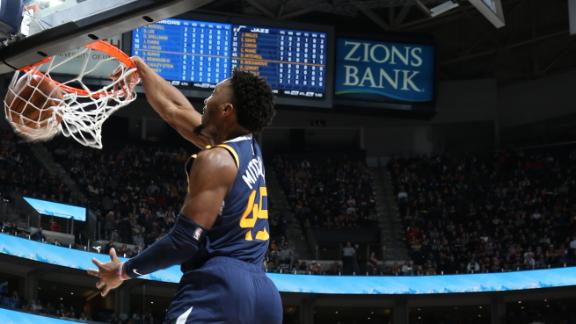 SALT LAKE CITY -- Golden State worried so much about defending Donovan Mitchell that Bojan Bogdanovic repeatedly found himself wide open on the perimeter.

That turned out to be just what the Utah forward needed to overcome a recent shooting slump.

Bogdanovic made a go-ahead basket in the final two minutes, hit eight three pointers and scored 32 points to help the Jazz beat the Golden State Warriors 114-106 on Friday night.

Mitchell added 28 to help Utah win for the third time in four games.

While going 8 for 13 from 3-point range, Bogdanovic encountered token resistance much of the time.

"They were more scared of Donovan than my 3s," he said. "That was their game plan."

Getting in the win column proved tougher than expected. Utah did not take the lead for good until Bogdanovic and Mitchell hit back-to-back 3-pointers with 1:18 remaining that gave the Jazz a 109-104 lead.

Bogdanovic shot 61.5% from 3-point range and went 8 of 18 overall after shooting under 40% from the field in five of his last six games. That slump is a memory now.

"So, I like where we're heading. I really do," Kerr said. "I know that may sound crazy, because of our record, but I think we're going to start winning some games. I think we're getting better."

Golden State got a big lift from its bench starting in the waning minutes of the first quarter. The Warriors held Utah without a basket over the final four minutes of the quarter. That opened the door for a 9-0 run, capped by a step-back jumper from Russell just a few seconds into the second quarter that gave Golden State a 31-22 lead.

"The offensive rebounds really hurt us in the first half," Jazz coach Quin Snyder said. "Those were additional possessions. Golden State makes you expend a lot of energy in the half court guarding them and then they go to the boards."

The Warriors led by as many as 13 points during the second quarter. O'Neale buried a 3-pointer and threw down a dunk to help the Jazz trim the deficit to 41-37. Golden State countered with a 9-0 run, scoring baskets on four straight possessions. Burks punctuated the run with a jumper that gave the Warriors a 50-37 lead.

Utah came alive in the third quarter behind the perimeter shooting of Bogdanovic. He buried back-to-back 3-pointers to fuel a 14-4 run that gave the Jazz a 76-68 lead.

"Our energy was completely different in the third quarter," Bogdanovic said.

Golden State went ahead once again early in the fourth quarter when Russell started a 7-0 run with a 3-pointer that put the Warriors up 91-88.

Burks was a standout once again on a return trip to Salt Lake City. He averaged 22.0 points on 50% shooting over two road games against the Jazz. The Warriors guard spent eight seasons in Utah, appearing in 382 games and averaging 9.6 points.

Some of Burks' ex-teammates remain on the roster and that familiarity has bred success for him in a normally tough road venue.

"In eight years here, I scored on every one of them, more than a few times," Burks said with a laugh. "It's always fun to play against those guys."

Golden State finished with a 48-43 rebound advantage against Utah. The Jazz came away feeling good about it after recovering from a sluggish start on the glass. The Warriors outrebounded Utah 26-16 in the first half. The Jazz picked it up in the second half and edged Golden State 27-22 on the boards. They limited the Warriors to four offensive boards after halftime.

"We could have easily said 'Here we go again' down at home to a team we should beat," Mitchell said. "For us to be resilient and continue to fight just shows the progress we've made."