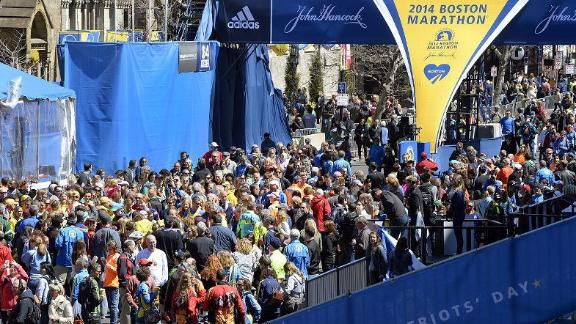 BOSTON -- With security tight along the 26.2-mile route, tens of thousands of runners set out from the starting line at the Boston Marathon on Monday in a "Boston Strong" show of resilience a year after the deadly bombing.

"I showed up, I'm back, and I am going to finish what I didn't finish last year," said Mary Cunningham, 50, of St. Petersburg, Fla., who was stopped a mile short of the finish line by the explosions last year.

The two pressure-cooker bombs that went off near the finish line killed three people and wounded more than 260.

Police were deployed in force along the course, with helicopters circling above and bomb-sniffing dogs checking through trash cans. Officers were posted on roofs.

Boston Marathon race director Dave McGillivray said it had been a long and difficult year.

Russian-born Tatyana McFadden of the University of Illinois won the women's wheelchair race for the second straight year. McFadden celebrated her 25th birthday Monday and listened as "The Star-Spangled Banner" played on Boylston Street one year after the bombings that left three dead and more than 260 injured. She crossed the finish line in 1 hour, 35 minutes, 6 seconds.

McFadden was born in Russia and lived in an orphanage as a child. She also won the 2013 New York City Marathon women's wheelchair race after taking the titles in Boston, London and Chicago last year.

A total of 35,755 athletes were registered to run -- the second-largest field in its history, with many coming to show support for the event and the city that was traumatized by the attack on its signature sporting event.

"I can't imagine the number of emotions that are going to be there," said Katie O'Donnell, who was stopped less than a mile from the end last year. "I think I'm going to start crying at the starting line, and I'm not sure I'll stop until I cross the finish line."

Buses bearing the message "Boston Strong" dropped off runners at the starting line in the town of Hopkinton. A banner on one building read: "You are Boston Strong. You Earned This."

The most obvious change for the 118th running of the world's oldest annual marathon was the heavy security. Nevertheless, many found the atmosphere to be calm and friendly.

"I think everybody is being very pleasant," said Jean Bertschman, a Hopkinton resident who comes to watch the start of the marathon most years and had never seen anything close to this level of security.

Spectators went through tight security checkpoints before being allowed near Hopkinton Common.

Runners had to use clear plastic bags for their belongings, and fans hoping to watch near the finish line were encouraged to leave strollers and backpacks behind.

More than 100 cameras were installed along the route in Boston, and race organizers said 50 or so observation points would be set up around the finish line to monitor the crowd.

Runner Scott Weisberg, 44, from Birmingham, Ala., said he had trouble sleeping the night before.

"With everything that happened last year, I can't stop worrying about it happening again. I know the chances are slim to none, but I can't help having a nervous pit in my stomach," Weisberg said.

Race organizers expanded the field from its recent cap of 27,000 to make room for more than 5,000 runners who were still on the course last year at the time of the explosions, for friends and relatives of the victims, and for those who made the case that they were "profoundly impacted" by the attack.

Lelisa Desisa of Ethiopia and Kenya's Rita Jeptoo, who crossed the finish line on Boylston Street about three hours before the explosions, returned to defend their championships. Desisa came to Boston last fall to donate his first-place medal to the city as a gesture of support.

Jeptoo, who also won the race in 2006, said she is hoping for a third victory -- and one she can enjoy.

"It was very difficult to be happy. People were injured and children died," she said of last year's marathon. "If I'm going to win again, I hope I can be happier and to show people, like I was supposed to last year."

Dzhokhar Tsarnaev, 20, is awaiting trial in the April 15, 2013, attack and could get the death penalty. Prosecutors said he and his older brother -- ethnic Chechens who came to the U.S. from Russia more than a decade ago -- carried out the attack in retaliation for U.S. wars in Muslim lands.

Tamerlan Tsarnaev, 26, died in a shootout with police days after the bombings.