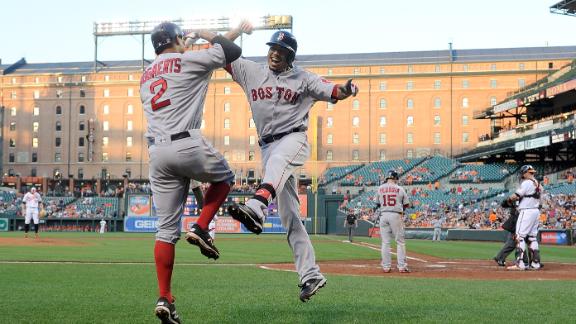 One night after belting three home runs, one to each part of the field, Betts went deep in his first two at-bats in Wednesday's13-9 loss to the Baltimore Orioles, becoming the first player ever to hit a home run in each of the first two innings of consecutive games.

Betts also tied a major league record with five homers in a span of seven at-bats, the first player to achieve the feat since Josh Hamilton, who did it for the Texas Rangers on May 7-10, 2012.

"I didn't know that. Tying is pretty cool," Betts said. "[Hamilton] is pretty good. To tie someone like that is pretty special."

Betts maintained that he doesn't consider himself a power hitter, even though he has 14 homers, one behind David Ortiz for the team lead.

"I see myself as a gap-to-gap doubles hitter," Betts said. "They're just going over the fence right now."

On Tuesday night, Betts said he "surprised" himself by hitting the first opposite-field homer of his career. He went to right field again in the first inning Wednesday, on a fastball from Orioles starter Mike Wright, then jumped on a changeup from Wright in the second inning.

Said second baseman Dustin Pedroia: "He's swinging the bat great. He's been a force all year for us. He's been fun to watch. Hopefully he continues to do what he's doing because it's pretty exciting."

"You rarely see it," manager John Farrell said of power surges like Betts'. "Sometimes you never see it in a career. We're blessed to be able to watch Mookie every night from our dugout."