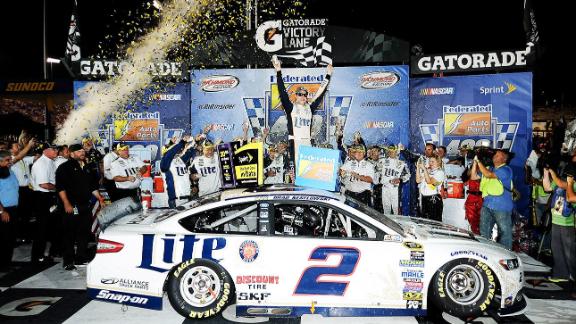 RICHMOND, Va. -- NASCAR's new win-and-in format had the potential to give one driver a shot at a dramatic last-grasp berth into the Chase for the Sprint Cup championship.

There were 17 drivers who could have raced their way into the Chase by winning Saturday night at Richmond International Raceway, but Brad Keselowski would have nothing to do with a storybook ending.

Keselowski routed the Richmond field, leading all but 17 of the 400 laps en route to his fourth victory of the season. It gave him the top seed in the Chase, which begins next Sunday at Chicagoland Speedway.

"What a night. I pulled into Victory lane and I pinched myself once to make sure I wasn't dreaming," said Keselowski, the 2012 champion. "These are nights you don't forget as a driver and you live for."

Kevin Harvick was the only driver who appeared capable of challenging Keselowski, but it was early in the race when he led the other 17 laps that Keselowski did not claim. His Stewart-Haas Racing team again struggled on pit road.

"It's probably the biggest thing that we have to fix in order to contend for the championship," Harvick said.

The lack of on-track action meant the only drama to come out of the race was when a fan climbed to the top of the Turn 4 catchfence that separates the track from the grandstands. NASCAR was forced to throw the caution flag with 69 laps remaining. A track spokeswoman said the unidentified man was arrested by Henrico County police and charged with being drunk in public and disorderly conduct.

"If he wants to play in traffic, it's his problem," said Denny Hamlin, who dropped two laps down because of the caution.

Defending NASCAR champion Jimmie Johnson finished eighth but was suffering from dehydration when he exited the car. He first laid down next to his car, then had to be helped to a cart by his Hendrick Motorsports crew. He was taken to the infield care center, where he was treated for roughly 90 minutes.

Johnson, who canceled his planned Sunday participation in a sprint triathlon for his foundation, said he was treated with five liters of fluids.

"I got dehydrated in the car and I'm not exactly sure what led to it," he said. "I started cramping when I got out of the race car and when I was cramping, I was trying to stand up and I got dizzy, so I sat back down."

Hendrick Motorsports teammate Jeff Gordon said it gets hot in the car.

"I know there was a couple times throughout the race where I felt like I was cramping, as well," Gordon said. "It's hot out there. It's hard to keep your fluids."

Nothing fazed Keselowski, who came to Richmond a year ago needing a strong finish to make the Chase field, but failed and was not eligible to defend his title. Now he'll try to give Team Penske a season sweep -- Will Power gave the organization the IndyCar championship a week ago.

"I think last year was a bit of a kick in the butt," Keselowski said. "It was enough to really push us all and find another level. We did a great job in 2012, but in the sports world you've got to keep progressing. Everyone else progressed and we didn't."

There were two spots up for grab in the 16-driver Chase field, but Ryan Newman and Greg Biffle pretty much entered the race in control of their own fate. Newman never left anything to chance with a strong ninth-place finish, and Biffle slid into the final spot with a 19-place finish.

"When you are that far off, it is the hardest thing in the world to drive," Biffle said. "This is the toughest thing I've ever done in my life, drive and try to stay in the top 20."

Gordon, the points leader for much of the regular season, finished second. Clint Bowyer, who needed to win to guarantee his Chase berth, was a disappointing third.

"I knew coming in here, it was a long shot at best," Bowyer said. "We put it all out there. I raced as hard as we could. At our very best, we were a third-place race car tonight at my very best race track."

Bowyer was caught in the middle of a scandal at this race a year ago when his late-race spin set in motion a chain of events that helped then-teammate Martin Truex Jr. make the Chase at the expense of Newman. NASCAR eventually threw Truex out of the Chase, put Newman in and added Gordon as an additional driver.

He was dejected Saturday night after coming up short, but said his Michael Waltrip Racing team wasn't championship-level, anyway.

"If you make the Chase, you want to compete for a championship," he said. "Truth be told, we're not there right now."

Tony Stewart, in his second race back since he sat out three after his sprint car struck and killed Kevin Ward Jr. at a New York dirt track, finished 15th. He would have been eligible to compete in the Chase if he won Saturday night's race based on a waiver NASCAR gave him upon his return last week. The three-time champion had cracked the top 10 but his crew missed a lug nut on a late pit stop that took him out of contention.

Keselowski Clinches Top Chase Seed With Win
Brad Keselowski led all but 17 of the 400 laps at Richmond International Raceway, clinching the top spot in the Chase for the Sprint Cup championship.