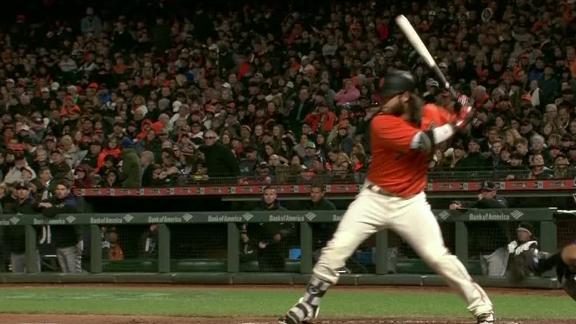 It let him know that his sister-in-law was still with him and his family.

Crawford's wife, Jalynne, shared on social media on Thursday that her sister, Jennifer Pippin, passed away due to an asthma attack. According to Jalynne Crawford, Pippin was a big Giants fan and never missed a game.

The Giants shortstop wasn't in Thursday's starting lineup following his sister-in-law's death. According to the Mercury News and San Francisco Chronicle, manager Bruce Bochy told Crawford he could take more time off if he needed it, but Crawford said he wanted to play on Friday.

Crawford's blast, his second of the season, gave the Giants a 4-0 lead in what would end up an 8-2 win over the Colorado Rockies. As Crawford approached home plate, he looked to the heavens and pointed his hands toward the sky.

"I tried to get around the bases as fast as I could. That one was for Jenn," Crawford told reporters after the game. "Something like that, it lets you know that there's somebody greater out there that's looking over you.I know she was watching this game tonight, and I was glad I could do something.

"When she was at home, she was always watching every game. I'm sure she's still watching down on us."

Jalynne tweeted her reaction to her husband's home run right after it was hit. Later, Brandon shared an image of him looking up to the sky after the homer.

The power of sports -- what a wonderful thing it can be in tough times.