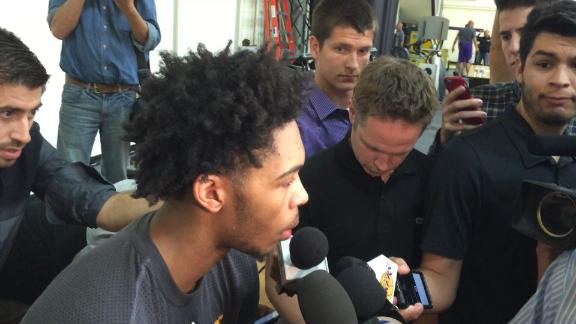 EL SEGUNDO, Calif. -- Most prospects are watching their weight and body fat percentage before the NBA draft on June 23.

The universal knock against Ingram, a 6-foot-10 forward and consensus top-two pick, is his rail-thin frame. He says he's up to 195 pounds now, which is still far below NBA standards and could be problematic against physical competition.

"Just eat everything I can," Ingram said after his private workout with the Lakers at the team's training facility on Thursday. "At my weight, I think I can eat anything. I don't have a certain diet for myself. I just eat anything I can and stay in the weight room as much as possible."

So far it has worked.

When Ingram got to Duke last fall, he weighed 169 pounds. Since then, he has packed on more than 26 pounds and said he plans to gain another 10-15 pounds before training camp begins in October.

To demonstrate his commitment to bulking up, Ingram made sure to scarf down his meal when he had dinner with Lakers executives on Wednesday night.

"I know it's going to be a long process," Ingram said. "But at the end of the day, it's basketball. It's what I've been doing my whole life: trying to score the ball and trying to defend. I know everybody in the NBA develops their body in the summer. I'm trying to do the same thing."

As for an optimal size or weight, Ingram said he hasn't decided yet. Frankly, it's somewhat out of his control.

"Whatever I can get to," Ingram said. "I know my body is going to get there."

Being underweight has its advantages, though, because it also helps make Ingram incredibly versatile on both ends of the floor. While he projects as a small forward, Ingram can shift between shooting guard and power forward as well. Duke coach Mike Krzyzewski helped instill those skills in Ingram during the player's brief stint with the Blue Devils.

"When I got recruited by Coach K, he always told me I was positionless," Ingram said. "I think whatever organization I land [with], I know they'll have a great coach that will see wherever I'll fit in, and wherever they fit me in is where I'll play."

Ingram showed off his versatility in one-on-one and 2-on-2 drills during Thursday's two-hour workout. His developing midrange game and his accuracy from deep also were on display in shooting exercises (Ingram shot 41 percent on 5.4 3-point attempts per game at Duke).

"Being versatile is a part of this game nowadays," Ingram said. "I think with my body type and how tall I am and with the size I'm developing, it's going to be important for me to play in different positions on the floor."

Ingram has a 7-foot-3 wingspan and a 9-foot-2 standing reach. Given his height, length, lankiness and prowess as a scorer and shooter, Ingram is commonly compared to Oklahoma City Thunder superstarKevin Durant.

Ingram acknowledges there are similarities between himself and Durant and said he appreciates being compared to a likely future Hall of Famer, but added he doesn't want to be categorized as Durant's successor.

He sees himself as his own player, with his own identity.

"I hear it a lot," Ingram said of the Durant comparisons. "Of course, he's way ahead of me right now. That's where I want to be. I want to be somewhere where I can make my own name."

Ingram has patterned a large part of his game after Durant's, but he isn't the only scorer Ingram has studied and dissected. Ingram has made a point to study San Antonio Spurs legend George Gervin, who retired more than a decade before Ingram was even born in 1997.

"I watch him a lot," Ingram said. "I'll try to develop his finger roll or his hook shots. I just take different things from each player and try to develop them into my game."

The Lakers, in particular, could use Ingram's budding, all-around skill set.

Ingram, in theory, would address those needs.

Ingram, who won't be 19 until Sept. 2, is the youngest collegiate player in the draft. It's unclear how high his ceiling is, especially if he bulks up as much as he plans to.