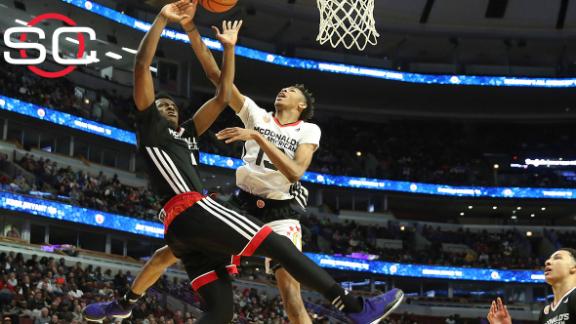 Brandon Ingram, the nation's top uncommitted player, has announced he will attend Duke next year.

Ingram, a 6-foot-8 small forward from Kinston, North Carolina, is ranked No. 3 in the ESPN 100. He chose the Blue Devils over in-state competition from North Carolina and NC State as well as Kansas and Kentucky.

He hosted each of those five schools for in-home visits in the past two weeks, with Duke making two trips to see Ingram late in the process. Ingram had taken visits to each school, along with UCLA.

From early in Ingram's recruitment, the popular thought was that he wasn't going to leave the state for college. Duke and North Carolina both made Ingram a priority, with the Tar Heels hoping to make him the next in a Kinston-to-Chapel Hill pipeline that included Reggie Bullock and Jerry Stackhouse, who coached Ingram on the AAU circuit.

Ingram said recently that he would have likely committed to North Carolina in the fall if not for the school's academic scandal and potential NCAA issues.

Duke was able to close the gap over the past few months. The Blue Devils are offering the chance to play a major role immediately -- as they lose four starters from the team that won the national championship earlier this month. Mike Krzyzewski and his staff put the full-court press on Ingram recently, visiting with Ingram multiple times and getting him on campus again in February.

Despite the NBA draft early entries of Jahlil Okafor, Justise Winslow and Tyus Jones and the graduation of Quinn Cook, Duke has restocked in its quest for back-to-back titles. Ingram moved up to No. 3 in the senior class after strong performances at the McDonald's All American practices and game, demonstrating his massive NBA potential. His size, length and shooting ability make him a major matchup problem at the next level.

Ingram's commitment gives Duke the No. 1 recruiting class in the country for the second consecutive year. He joins McDonald's All Americans Chase Jeter (No. 11) and Luke Kennard (No. 24) as well as five-star point guard Derryck Thornton (No. 17), who reclassified into the 2015 class and pledged to the Blue Devils last week. Three-star center Antonio Vrankovic is also entering Durham next season.