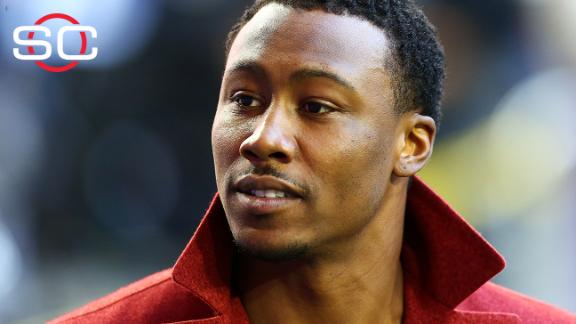 "There was an opportunity where [the Bears] could have traded me before the season. My agent and the Chicago Bears -- there was a little tension on the contract stuff. I thought I was worth a little more and I ended up settling. There were a couple of teams that were offering more money, but hey, if I went [to New England] there is no telling what could have happened."

"It never got that far, but there was a possibility [of working a trade] with a couple of teams," Marshall said.

After catching 218 passes for 2,803 yards and 20 touchdowns in his first two seasons in Chicago, Marshall's production declined rapidly in 2014. Bothered by lingering injuries, Marshall finished a disappointing fourth on the teamin receptions (61) and receiving yards (721) as the Bears' record plummeted to 5-11.

On March 6, Chicago traded Marshall and a 2015 seventh-round draft choice to the Jets in exchange for a fifth-round pick.

Marshall said he and Bears quarterback Jay Cutler have not spoken since the trade. Marshall and Cutler were always portrayed as having a strong relationship dating all the way back to their days together in Denver.

"No, I haven't [talked to Cutler]," Marshall said.

"Yeah, I just haven't talked to him. We didn't talk at all, but it was kind of funny -- [Jets receiver] Eric Decker sent out a picture of me relaxing with my feet up during downtime, and he sent out a group text to me, Brandon Stokley and Jay Cutler. So there was a little communication back and forth between those guys. But I haven't personally [talked to Cutler]. But I've seen [Cutler's wife] Kristin [Cavallari]. I saw Kristin two weeks ago because I'm in town [Chicago] every weekend. I gave her a big hug. She's awesome."