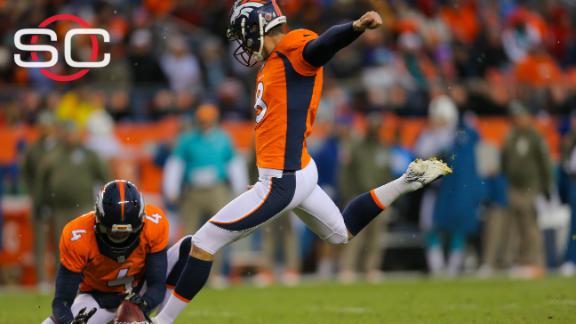 In a two-minute drill as the practice drew to a close, Brandon McManus pounded a 70-yard field goal through the uprights. Connor Barth followed with a 65-yard kick just minutes later.

McManus and Barth are each trying to be the Broncos' kicker for the coming season and have waged a close competition throughout camp. They've had moments when they've struggled, but Tuesday was not one of them.

McManus' kick cleared the crossbar with enough additional distance that even the Broncos' defense cheered the effort. Cornerback Bradley Roby, who had rushed McManus on the play, hugged him after the ball sailed through.

"I actually told Coach [special-teams coordinator Joe] DeCamillis that I could make this one," McManus said. "I don't know if he believed me or not, so I saw him smirk at me and he went over to coach [Gary Kubiak]. ... I just waited for them to make the call. I knew I could get it there, it was just whether -- it does look far away, I'll tell you that."

Prater believes hitting a 70-yarder in a game is possible. Like McManus, he has hit them in practice and said he used to attempt them in warm-ups while with the Broncos.

Now with the Detroit Lions, Prater said he has tried them recently as well.

"If it's the right opportunity at the end of the game or before a half and that's your best option, why not attempt it," Prater said. "It's definitely doable."

Both Prater and Lions snapper Don Muhlbach said they believe there are multiple kickers in the league who can make a 70-yarder -- but it would have to be in a scenario in which a miss wouldn't flip field position drastically. Essentially, it would have to happen when there's little time left on the clock.

Prater said he believes a 70-yarder could happen in Denver, in a dome or somewhere very warm early in the season.

McManus lost the job as the Broncos' place-kicker last season after a midseason slump that saw him miss three kicks in a five-game span. He was released after missing a kick on Nov. 23 in Miami, and Barth was signed.

Barth then made 15 of 16 attempts, including two games in which he hit five apiece, to close out the regular season.

The two have spent much of the offseason battling for the job, and Kubiak has said it will be a "tough, tough decision."