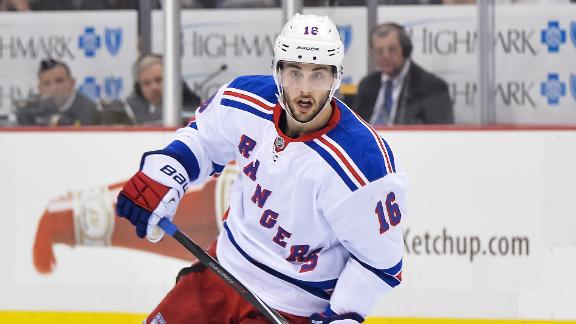 Prust was suspended two games for the hit that resulted in Stepan having surgery Friday night.

"It's an unfortunate injury," Prust, a former Ranger, told the assembled media Saturday. "Unfortunate for him, and unfortunate for me. My mindset is not trying to injury anybody. And Step is a friend of mine. My main focus on the hit was keeping my elbow tucked, trying to make sure I got him in the chest.

"By no means, whether they're friends or not, you don't want to injury anybody. It's very unfortunate."

Prust said he texted Stepan once he heard of the broken jaw.

"I reached out to him, I texted him, just told him: 'I feel awful,"' Prust said. "I didn't want to injure anybody, especially a friend of mine. I told him exactly what I told you guys, it was my first shift and I was just trying to create some body contact. I feel awful. You never want to hurt anybody. I hope he recovers well."

Asked if Stepan returned the text, Prust said: "Yeah, it was short. But I think he understands where I'm coming from. It's a tough situation right now."

Prust had no issue with the league's decision to suspend him two games.