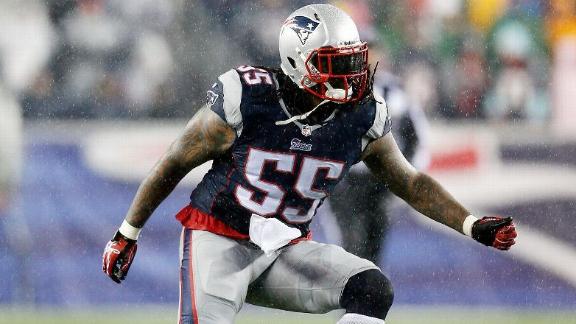 Spikes signed a one-year deal with Buffalo this offseason after a contentious end to his stint with the Patriots, who placed him on injured reserve in January.

The 26-year-old Spikes, who was critical of the Patriots in an interview last month with a Buffalo radio station, took to Twitter on Wednesday to rant against his former team.

Great games on the schedule for 2014, but it's going to be like Christmas to hand the #Patriots #PatriotsNation a L...twice! #BILLSMAFIA

it's icing on my cake to hand the #Patriots two big L's this year. #justwatch

- BrandonSpikes51 (@BrandonSpikes51) April 9, 2014Spikes was placed on season-ending injured reserve before the postseason with what the Patriots reported as a knee injury. But Spikes refuted that he was injured, telling WGR Radio that "that's just how things go there."

ESPN NFL Insider Chris Mortensen reported the Patriots and Spikes mutually agreed to the IR designation as opposed to an outright release after the linebacker was late to a team meeting that week. Spikes' agent later denied that it was a joint decision.

Spikes also reflected on his Patriots stint during the radio interview, saying "I wouldn't say happy" when asked about his time in New England.