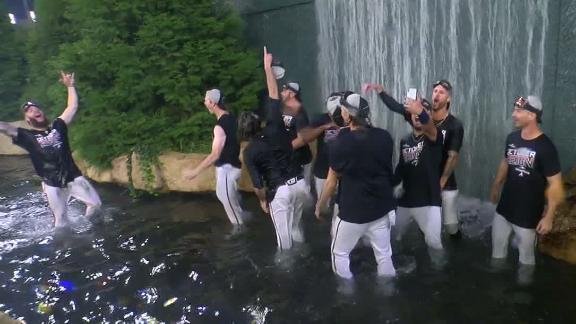 ATLANTA -- Freddie Freeman didn't care that his eyes kept tearing up from all the beer and bubbly soakings.

It seemed as though every teammate stopped by to blast him, and he loved every minute of it.

"This is the first step of hopefully a few celebrations to come," Freeman said with a big smile. "We're excited. We've got a really good ballclub. We're just getting started."

The Atlanta Braves clinched their second consecutive National League East title as Ronald Acuna Jr. hit his 41st homer in a 6-0 victory over San Francisco on Friday night that eliminated the Giants from playoff contention in Bruce Bochy's final season as manager.

Acuna scored three runs to back Mike Foltynewicz (8-5), who allowed three hits in eight innings. Atlanta's 19th division title tied the New York Yankees for the most since Major League Baseball split into divisions for the 1969 season.

Atlanta's win ensured it will finish ahead of second-place Washington and will start the NL Division Series at home on Oct. 3, most likely against the NL Central champion.

Atlanta (95-60) moved into sole possession of first place for good on June 12. Led by Acuna, Freeman, Josh Donaldson and an offense that has produced a franchise-best 241 homers, its lead swelled from 5 to 10 games in six days ending with a 9-4 home win over Washington on Sept. 7.

"Last year I kept running around with blinders on wondering if we were good enough to pull it off," Braves manager Brian Snitker said. "This year, as it went, it was like we're pretty good. Nobody gave us a chance early, and it was good to see these guys get on a roll. Just took care of business, winning a lot of first games and winning a lot of series. That was big."

The Braves, who have not won a postseason series since 2001, secured a postseason berth last week and needed a few extra days to clinch the division. They lost three in a row for the first time since July 16-18 but have won two straight.

Bochy was given a standing ovation when a video tribute was played before the second inning. The 64-year-old is retiring after 25 seasons as a major league manager, including 13 years in San Francisco highlighted by three World Series titles. He managed his 2,000th regular-season victory this week.

The Braves remind Bochy of some of his better clubs.

"They have such a good lineup," he said. "They've got speed, they've got youth, they've got experience. They've had a heck of a year. Congrats to them for clinching tonight."

Foltynewicz, who also won last year's clincher in Game No. 155, is 4-0 with an 0.69 ERA in four starts this month. He has won seven straight decisions in a span interrupted by a six-start demotion to Triple-A Gwinnett, but the Braves have won his past 12 starts, the longest streak in the majors this year.

Freeman's sacrifice fly in the first and Ozzie Albies' RBI single in the second built a lead. Acuna hit a two-run homer in the fourth, and Brian McCann added a two-run blast in the sixth off Tyler Beede (5-10), who allowed seven hits in six innings.

Acuna has been a catalyst the past two games.

"This kid is liable to go off for the next two weeks and be in a really good place when we start the playoffs," Snitker said. "You can kind of see the evidence of that tonight."

Mike Yastrzemski had three of the four hits for the Giants (74-80).

Acuna, the reigning NL Rookie of the Year, became the 14th-youngest player reach 100 RBIs in a season at 21 years, 276 days. On Thursday, he joined Mel Ott and Eddie Mathews as the only players to hit 40 homers prior to their 22nd birthday.

He has 126 runs and needs six to break Dale Murphy's franchise season record, set in 1983.

"In my opinion, he's probably going to be the best player in the game, if not now, in a couple of years," Freeman said.

Braves jump into water to celebrate division title
Braves pitcher Luke Jackson jumps into the water in the outfield of SunTrust Park, leading to a group of players celebrating by the waterfall.
Report a correction or typo
Related topics:
sportsespnatlanta bravesmlbsan francisco giants
Copyright © 2020 ESPN Internet Ventures. All rights reserved.
More Videos
From CNN Newsource affiliates
TOP STORIES
Some churches wait on CA order to reopen, others to resume in-person service regardless