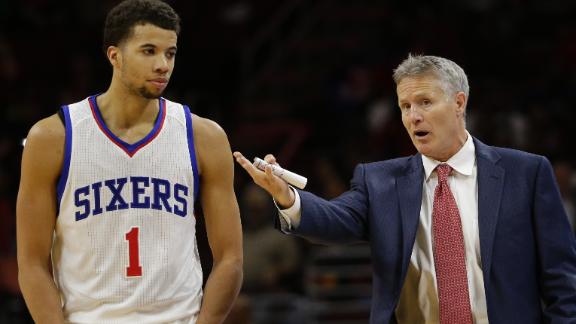 As the Philadelphia 76ers try to build off their first victory after an 0-17 start to the season, coach Brett Brown emphasized that the team is not tanking the season.

"Everything we're doing is about winning. I coach to win," Brown told ESPN's "SportsCenter" on Friday morning. "I talk about winning. We plan to win. We prepare to win. I get why [tanking] comes up, but it's not even close."

The Sixers, who had been outscored by an average of 14.4 points during their 17-game losing streak, got in the win column Wednesday with an 85-77 victory against Minnesota. They'll try to make it two in a row Friday night against visiting Oklahoma City.

Losing hasn't come easy for Brown, who was hired to coach the Sixers after spending six years as an assistant to Gregg Popovich with the San Antonio Spurs.

"Where do you begin? I left Disneyland with Pop in San Antonio. We won 50 games every one of my years, went to five NBA Finals, won four of them," Brown told ESPN. "To come in now and have the challenge of coaching. ... It's the youngest team in the history of the sport. We're the team with the least experience.

"The challenges are all over the place. From trying to grow the team, to make sure they don't feel deflated, that they feel good about themselves. ... But I love it. Even though what I know now, with two draft picks not playing this year, I'd take this job 50 times out of 50 times."