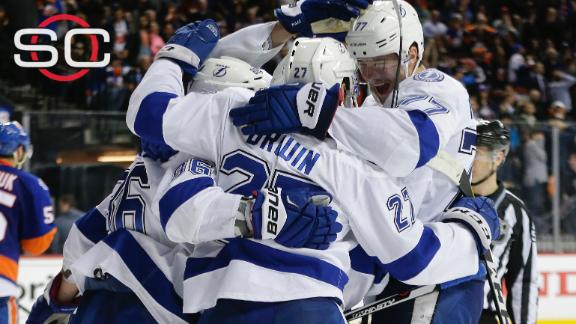 Despite some uproar on both sides, neither Tampa Bay Lightning center Brian Boyle nor New York Islanders' defenseman Thomas Hickey will face discipline for a couple of controversial hits in Tuesday night's game.

Boyle made a high hit on Hickey in overtime. The defenseman tumbled to the ice and couldn't get back into the play in time as Boyle grabbed a loose puck and fired in the game winner. A source confirmed to ESPN's Joe McDonald that the league will not hold a hearing over the hit.

Earlier, in the second period, Hickey leveled Lightning forward Jonathan Drouin, sending him to the locker room. Drouin returned with lacerations on his nose but was able to play and ultimately had an assist on the Lightning's game-tying goal with less than a minute to play in regulation.

According to the Tampa Bay Times, which first reported that Boyle won't have a hearing, Hickey also won't face discipline.

Drouin said that he thought Hickey's hit was clean, but Islanders coach Jack Capuano did not feel the same about the Boyle hit, saying Tuesday that the forward should be suspended. He stood by his comments this morning during a conference call with reporters.

"Your emotions are high after a game, but I watched it," Capuano said on Wednesday. "I had a chance to watch it, and I just feel like the hit was high. To me, it's a position where it's an odd-man rush going the other way too. It's one of those calls that [the ref] has a split-decision to make, so I'm going to stand by what I said and I thought the hit was high. It led to a really good scoring chance for them. ... To me, just seeing Thomas after the game, bleeding out of his mouth and his teeth, he got hit in the head. I'm not going to change anything. I'm not going to change my opinion on that."