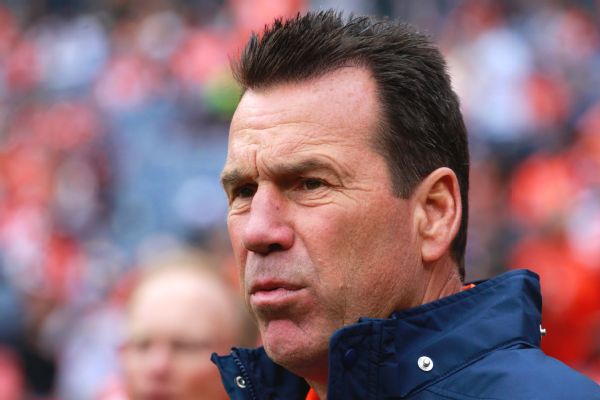 ENGLEWOOD, Colo. -- One day after cornerback Aqib Talib shoved a teammate,Denver Broncos coach Gary Kubiak said Monday that his players have to handle their emotions better.

Talibshoved receiverJordan Norwood after Norwood muffed a punt early in the fourth quarter of the Broncos' 30-27 overtime loss to the Kansas City Chiefs.

"We compete at the highest level," Kubiak said when he was asked about the incident. "Our guys compete all the time -- practice, games, those types of things -- so I see guys competing, guys are upset. Jordan and Aqib are fine, I can tell you that. That's not an issue."

The incident happened in a hard-nosed game the Broncos trailed 16-10 with 12 minutes left in regulation. Norwood, who had muffed a punt earlier in the game and struggled much of the time on a windy night, was set to field a Dustin Colquitt punt at the Kansas City 48-yard line, right in front of the Broncos' bench area.

Norwood drifted too far under the ball, which bounced off his facemask. Kansas City long-snapper James Winchester recovered at the Chiefs' 41-yard line. Many players on the Broncos' sideline reacted with anger and Talib took it one step further, shoving Norwood hard.

It did not escalate, as Norwood moved to sit on one of the team's benches while Talib and the Broncos' defense took the field. The Chiefs did not make much of the opportunity; they had a holding penalty and ran three other plays before punting on the ensuing drive.

Talib said he talked to Norwood on Monday morning.

Norwood also weighed in on the incident between the two.

"Me and Aqib sat down one-on-one,'' Norwood said. "We're on the same page. We squared things away."

"Emotions get in the way and those are things we've got to talk about,'' Kubiak said. "We've got to control our emotions. It's a very competitive environment down there and there was no harm intended, I can tell you that. Those two guys are fine."

Asked if he was "OK'' with what happened, Kubiak said:

"I want our guys to compete. We have to handle those situations better. I tell our guys all the time ... we battle together, we don't battle each other. And they understand that.''