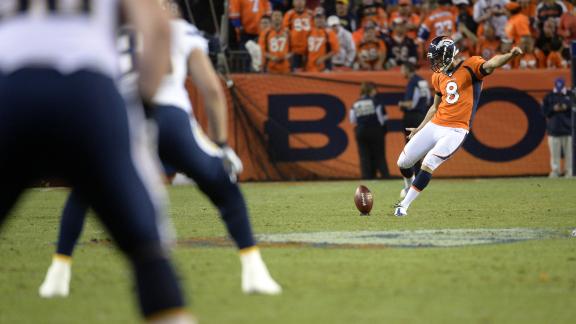 Barth, 28, hasn't kicked in a regular-season game since the 2012 season with the Tampa Bay Buccaneers. He did not play in 2013 after suffering a torn right Achilles tendon (his kicking leg) in a charity basketball game to benefit the Wilmington (North Carolina) Police Recreation Association.

The Broncos worked out both Barth and Jay Feely and came away impressed enough with the former's recovery to sign him. He will handle kickoffs as well. Barth, who was 2-of-2 on field-goal attempts this past preseason, was released by the Buccaneers just before the start of the regular season.

The Broncos have called McManus an NFL-worthy prospect and even traded a seventh-round draft pick to the New York Giants to acquire him during the preseason. But in what Fox routinely calls "a performance-based business," the Broncos decided McManus' play in recent weeks dictated the move.

McManus had four field goal misses in the past eight games, including a 33-yard attempt that hit the right upright in Sunday's 39-36 victory over the Miami Dolphins. Fox had also made it fairly clear his confidence in McManus had waned when the Broncos passed up field-goal attempts of 54 and 55 yards, indoors, in a Week 11 loss to the St. Louis Rams.

Fox had said "there is no search for a new kicker," even as Barth and Feely were in transit.

" ... We have tryouts every week, at a lot of different positions," Fox said. "As far as my satisfaction with Brandon McManus, is kind of like our record, we're 8-3, wish we were 11-0. But we are kind of where we are and we're always looking to improve our team if we feel need be.

"We're in a performance-based business, regardless of what your job description is, you're expected to perform. I don't think he's the worst kicker in the league by any stretch, as I mentioned earlier ... don't know there's a whole lot of kickers who've made every kick thus far, 11 or 12 games into the season. Whether you're a rookie or a 12-year veteran, you're still expected to perform. It doesn't matter what position."

McManus was just 9-of-13 on field goal attempts this season, and that .692 accuracy percentage put him ahead of only Nate Freese and Alex Henery, who have both been released by the Detroit Lions this season. In 2012 for the Buccaneers, Barth was 28-of-33 on field goal tries, including 12-of-13 between 40 and 49 yards, and 6-of-9 in attempts over 50 yards.

Barth is the third kicker for the Broncos since training camp opened. They released Matt Prater earlier this season in order to keep McManus, as Prater was scheduled to end his four-game suspension for violating the league's substance-abuse policy.