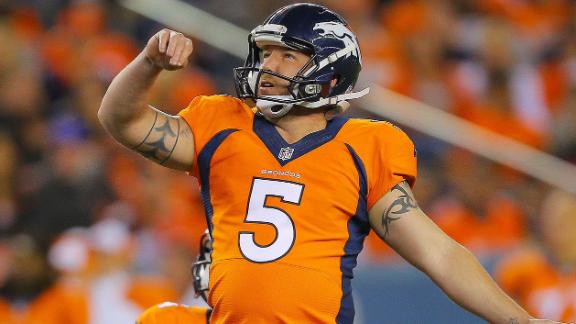 ENGLEWOOD, Colo. -- Citing a "football decision'' they felt they had to make, the Denver Broncos cut ties with the most accurate kicker in the franchise's history Friday when they released Matt Prater.

Prater, who had served three games of a four-game suspension for violating the league's substance abuse policy, was set to be reinstated Monday.

"Any time you make football decisions in an organization, especially [someone] that's been with you for a period of time like Matt, it's always difficult,'' Broncos coach John Fox said following Friday's practice. "It's always a football decision, what's going to give us the best chance, in our opinion. We wish Matt nothing but the best moving forward.''

Asked if Prater's most recent suspension and a 2011 DUI charge impacted the team's decision, Fox said, "Just an overall decision. ... I think I just answered that; they're all football decisions.''

The move keeps Brandon McManus, acquired by the Broncos in a trade from the New York Giants just after Prater's suspension was imposed, in the lineup. McManus was 3-of-3 on field goal attempts in the first three games -- from 21, 20 and 24 yards -- and has had 14 touchbacks on 16 kickoffs.

"I've been very impressed with him, he's got great potential, he's a great young kicker,'' Fox said. "We feel really good, and part of any football decision [is], you go with who you think gives you the best chance.''

Said McManus: "Definitely excited they put the faith, had the confidence in me to keep me here. ... I just wanted to perform well whether I was going to be here after the four weeks or another place, so I'm excited with the decisions.''

The move was rooted in McManus' performance, the Broncos' salary-cap status (with several front-line players poised for free agency following this season) and Prater's lukewarm preseason performance. Prater missed two kicks in the preseason, a 54-yarder and a 49-yarder.

McManus also missed two kicks in the preseason, a 52-yarder and a 54-yarder, both against Dallas and both just two days after he'd joined the team after the trade with the Giants. The Broncos shipped a seventh-round pick to New York for McManus in August.

Prater's contract also impacted the decision. His cap figure was originally $3.107 million for this season, and the Broncos will save $2.294 million off the cap this year and $3.25 million off their 2015 salary cap, as well.

"Part of it is evaluating Brandon,'' Fox said. "You take the leap of faith in a lot of personnel decisions. This is no different than any one we've made to this point in our tenure.''

There is a risk factor involved for a team that considers itself in the Super Bowl hunt. Prater made 25-of-26 field goal attempts last season (96.2 percent), including an NFL record 64-yarder in December. And his career 82.9 percent success rate makes him the most accurate kicker in franchise history. Prater has made 51 of his 54 career attempts in the fourth quarter or overtime.

"You've got to try to remain professional and know this is the way the business is,'' said punter Britton Colquitt, who is the team's holder. "But it's tough, Matt was here before me. ... It's tough; we had a really close relationship. He's a great kicker, the best honestly. It's tough. [I] love the guy.''