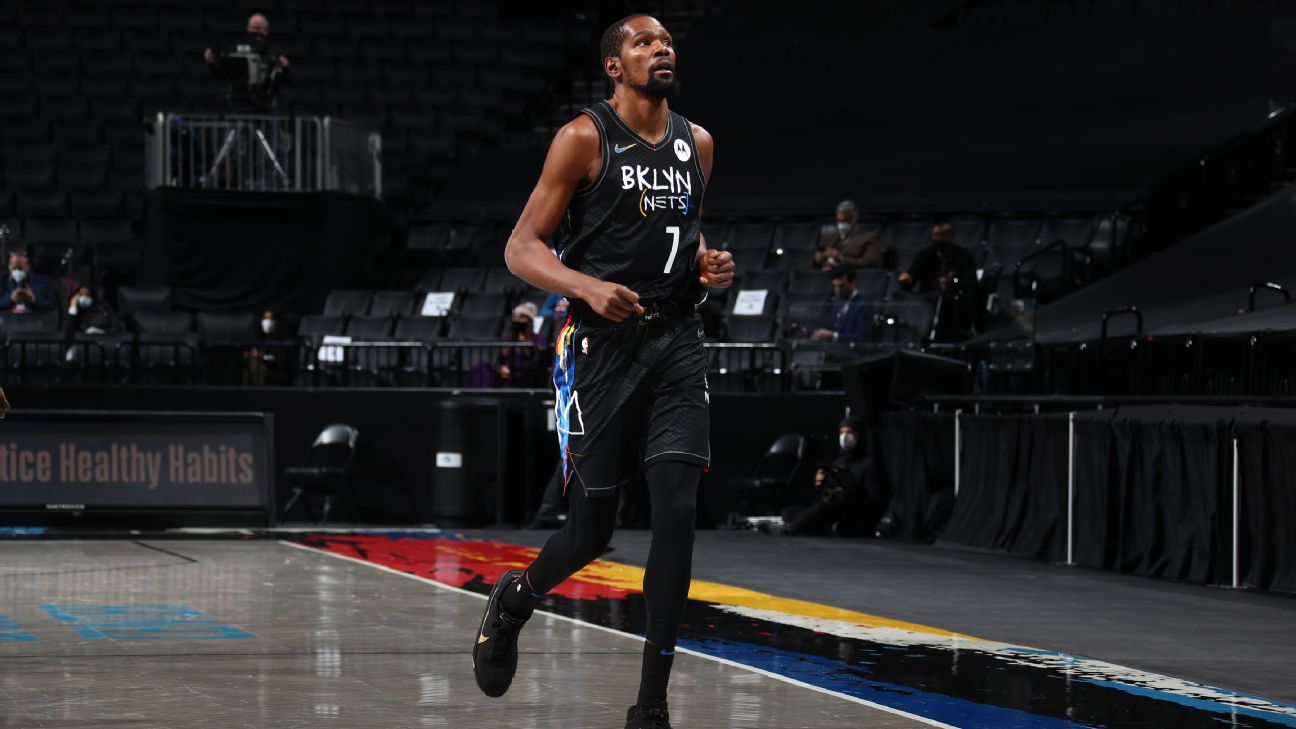 NEW YORK -- Kevin Durant practiced with the Brooklyn Nets on Friday after missing six days in the league's coronavirus contact tracing protocols and is slated to play on Saturday against his former team, the Golden State Warriors.

Friday was the first time Durant has been with the Nets since he was pulled off the court in the third quarter of a Feb. 5 game against the Toronto Raptors.


"I was a little upset during and after the game, but I'm cool now," Durant said. "I'm ready to play."

In a bizarre turn of events at Barclays Center on Feb. 5, Durant was unable to start the game because he had been in close contact with a team employee who had returned an inconclusive coronavirus test. He checked into the game midway through the first quarter and played 19 minutes before the employee returned a positive test, prompting Durant to be ruled out in the third quarter.

"It was just an unfortunate situation," Durant said, speaking about the incident with reporters for the first time. "I was looking forward to that game that night and being told right before tipoff that I had to wait a second for a test. You know, it just threw off the rhythm, my rhythm a bit because I wanted to go out there and play, but I'm back out there now. It is what it is."

Although Durant missed a week, Nets coach Steve Nash said he will not be on a minutes restriction against the Warriors.


Durant added that while it was frustrating to be yo-yoed in and out of the game against the Raptors and subsequently be placed in contact tracing protocols for the second time this season, it didn't take a sizable mental toll on him.

"It's not that bad," Durant said. "We're getting paid millions of dollars to hoop and do something we love every day. We'll figure the rest out."

Durant is making his return to Golden State for the first time since leaving for Brooklyn two years ago.

The Warriors said Thursday that they would play a tribute video in Durant's honor during Saturday's game and then next season when Durant and the Nets return to Chase Center, they will have a more formal celebration, in the hopes that fans will be in attendance.

"I remember a level of basketball that I don't think has ever been reached before," Warriors coach Steve Kerr said Friday, when asked to reflect on Durant's years with the Warriors. "Probably my strongest memory is the closing game of the '17 Finals, Game 5 at Oracle. ... I remember walking away from that game just thinking there's never been a level of offensive force in a basketball game ever than what we just saw."


The Nets will be without center DeAndre Jordan against Golden State. Nash said that the plan is for Jordan -- who is out for personal reasons that are unrelated to COVID-19 -- to continue to test for the coronavirus daily while he is away from the team and join the group at some point on its West Coast swing.

The Nets' five-game road trip, which kicks off Saturday, will be their longest of the season thus far. 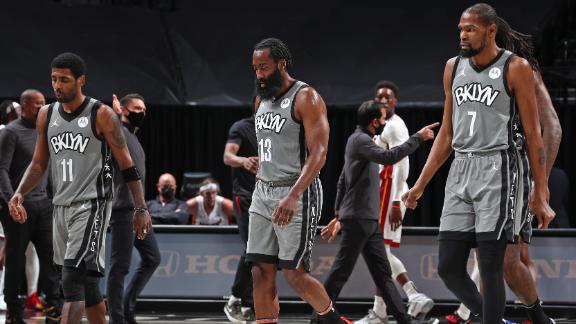 KD returns to Golden State with his new big 3 Saturday night
With Kevin Durant and the Nets headed to Golden State on Saturday, check out his journey from one big 3 to another, and the high hopes they have. 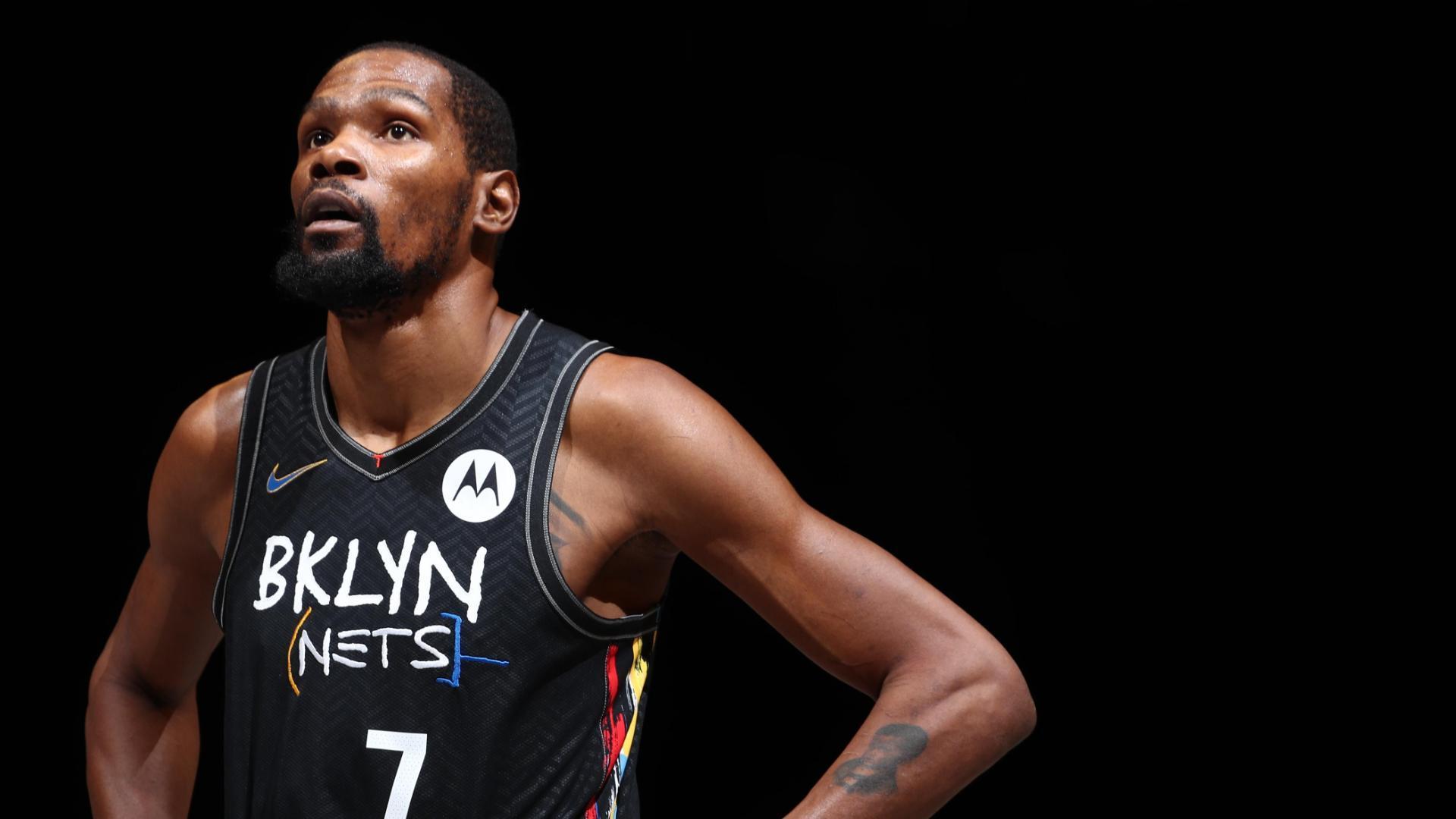