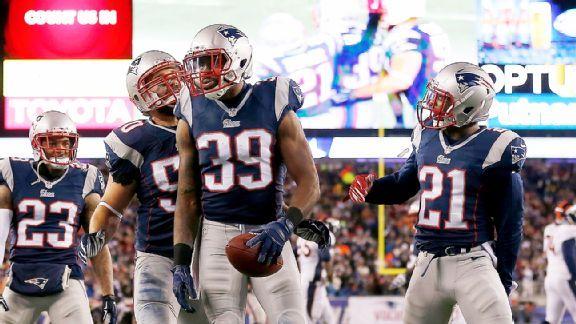 PHOENIX -- New England Patriots cornerback Brandon Browner stood by his remarks to ESPN's Josina Anderson about instructing teammates to go after injuries to Seattle Seahawks defensive backs Richard Sherman and Earl Thomas in Super Bowl XLIX, saying it is all in the spirit of competition.

"Those are my brothers. At the end of the day, there are no hard feelings," Browner said Tuesday during media day. "It's like in any game. You have a guy that messes his ankle up, you want to tackle him and make sure you land on the ankle. Say a guy messes his shoulder up; you tackle him and land on his shoulder. That's just a part of the game.

"You guys know how I close I am to those guys. At the time, that felt like the right thing to say."

Browner said he has since spoken with Sherman, who he said sent him a text message that read "LOL" upon seeing his comments.

"That's really one my best friends in life," Browner said of his former teammate in Seattle. "At the end of the day, I know what I mean by it and my heart is good ... my intent is good. They know who I am.

"They understand it's the mentality we've got as brothers. Like I told them, when I see them, it's competition all day long. Whether it's the pool table, the basketball court, I'm trying to win. They understand that."

Browner pointed out that he has a tattoo of the "Legion of Boom," which is the name of the Seahawks' secondary he was a part of from 2011 to 2013.

"That's what they mean to me. What I said wasn't coming from a bad place," Browner said. "I'm a competitor. Them boys are competitors, and that's why we have that bond. We're connected. I know they're going to lay their bodies on the line for me, just like I would for them. I love those guys. I wish them guys best, but I want to win the game."

In his ESPN interview with Anderson, Browner said, "At the end of the day, this is about the Super Bowl. I'm gonna tell my teammates, 'Go hit that elbow. Go hit that shoulder. Most definitely. Try to break it if you can.' You're gonna be my best friend after the game, but I know you want the Super Bowl just as bad as I do."

That led Seahawks linebacker K.J. Wright to express his disappointment in his former teammate.

"I didn't know he said that, but we don't play like that," Wright said Monday. "We don't go out there and try to hurt guys. And I don't care if they do have an injury. We're not going out there trying to hurt people, and especially guys you're close to."

"BB doesn't always say things the way he means them, but we know what he means," Sherman said. "We're OK with him, and he's OK with us. He's a competitor."

"He was just caught up in the moment," Sherman added. "He didn't mean any malice. It's one of those things. We know him as a person. Sometimes he exaggerates a little bit, but we know who he is.

"But nobody intentionally hurts anybody in this league that I know of. Guys have respect for one another and Brandon does, too."

Brandon Browner Conversation
Patriots cornerback Brandon Browner talks with Josina Anderson and discusses his emotions while he sat out last season's Super Bowl victory as a member of the Seahawks, and this year as he plays his former team in the Super Bowl.