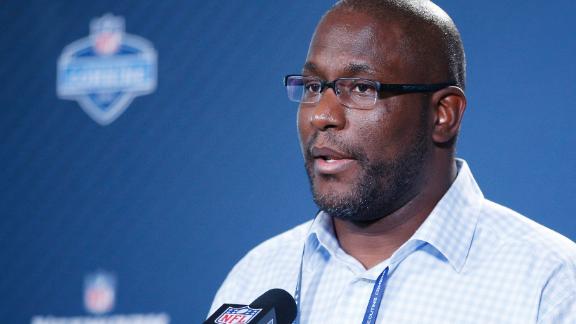 Cleveland Browns general manager Ray Farmer has been suspended without pay for the first four games of next season for sending texts to personnel during games in 2014 and the team was fined $250,000, the NFL announced Monday.

The Browns, however, did not forfeit any draft picks in the punishment, which was announced by NFL executive vice president of football operations Troy Vincent.

Farmer's suspension starts on the midnight of the Sunday before the Browns' Week 1 game and ends immediately after the team's Week 4 game. During his suspension, Farmer can't be involved in any team matters and is not permitted to be at the team's facilities or games.

"There was no evidence in the NFL's review that Browns ownership or any other team executives had knowledge of the prohibited conduct. Once the violation was discovered, Browns management implemented new processes to ensure future compliance," the NFL said in its statement.

Farmer admitted to texting during games in violation of the league's electronic device policy. Farmer has not revealed whom he texted, but sources and reports have said the texts went to an assistant coach and an unnamed team representative on the sideline and that the texts dealt with in-game strategy and use of personnel.

"I respect the league's decision and understand that there are consequences for my actions,'' Farmer said in a statement released by the Browns. "Accountability is integral to what we are trying to build, and as a leader, I need to set the right example. I made a mistake and apologize to Jimmy Haslam, [coach] Mike Pettine, our entire organization and our fans for the ramifications. Learning is a big part of who I am, and I will certainly be better from this situation.''

Farmer sent text messages throughout most of the season, a source close to the situation told ESPN.com. The texts took place during multiple games and continued at least until quarterback Johnny Manziel got his first start in Week 15.

The texts did not necessarily deal with strategy, but with issues related to quarterback play, second-guessing of play calls and use of personnel -- especially the quarterback. The individual on the sideline was expected to relay Farmer's information/requests to the coaching staff.

Browns owner Jimmy Haslam said he stands firmly behind Farmer, who has owned up to his mistake, and the Browns will accept the consequences.

"We accept the league's ruling,'' Haslam said in the statement. "Ray made a mistake and takes full responsibility for his role in violating the policy. It is critical that we make better decisions. Ray has tremendous integrity and I know has great remorse for what occurred. We are all committed to learning from this and making the Browns a stronger and better organization.''

Pettine admitted he was not pleased when the texts began, but he said at last week's league meetings that he and Farmer had talked it through.

"We both feel like we're very much on the same page and we're moving forward to make this team better," Pettine said.

ESPN.com's Pat McManamon and The Associated Press contributed to this report.