Browns go through three different quarterbacks in loss to Ravens 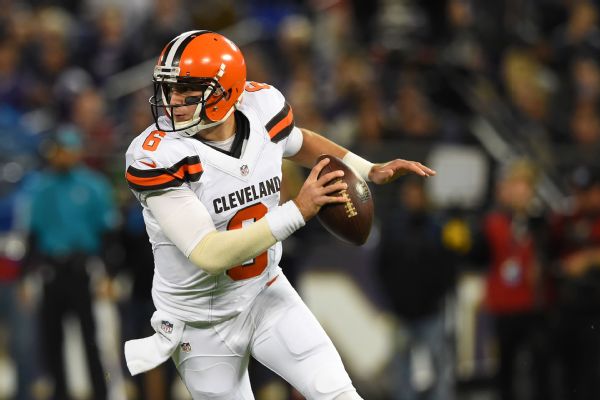 BALTIMORE -- Cleveland Browns coach Hue Jackson was looking for a spark when he pulled rookie quarterback Cody Kessler in the second half of Thursday's 28-7 loss to the Baltimore Ravens.

"I didn't think we were doing some things even in the first half that I thought we could do," Jackson said.

The spark did not come through.

When he didn't like what he saw from Kessler, he went to Josh McCown on the second possession of the second half and the Browns down 13-7.

McCown threw two interceptions, lost a fumble, was sacked three times and the Browns were outscored 22-0 in the second half.

The end result gave the Browns an 0-10 record, the worst start in team history. Going back to last season, they have lost a team-record 13 games in a row.

"If you feel something's not going the way you wanted it to," Jackson said, "then you need to change it."

The move was for this game only. Kessler will start when the Browns return Nov. 20 against Pittsburgh.

Jackson was well aware he had said three days earlier that he was not playing musical chairs with his quarterback, but he did not feel he was.

"You can say that all you want," he said. "I didn't think we were playing good enough at that position at the that time, so I wanted to do something different. If I had left [Kessler] in there and we're still not playing good, that's not good either."

In last week's 35-10 loss to Dallas, Kessler played the entire game. The Browns scored 10 points, had 28 yards in the second half and went 1-for-9 on third down in that loss.

Against the Ravens he had a first half touchdown pass, but after a second half opening three-and-out, was 1-for-6 on third down.

Jackson also used Kevin Hogan for two plays in the first half to run the read-option, which meant the Browns were the first team to use three quarterbacks in a game since the Philadelphia Eagles used Mike Vick, Vince Young and Mike Kafka on Dec. 18, 2011, according to ESPN Stats & Information.

"Nobody had said anything to me about playing in this game, but things change," McCown said. "You just have to roll with it. You go into the game and do the best you can."

"We all found out about it when Josh came out there in the second half," left tackle Joe Thomas said.

Kessler was 11-for-18 for 91 yards with a touchdown. McCown 6-for-13 for 59 yards with no touchdowns and two interceptions. The Browns finished with 144 yards in total offense.

One of the first things McCown did when he heard he'd be going in the game was go to Kessler and encourage him.

"I need to get better," Kessler said.

Well before the game, Robert Griffin IIIwas on the field for a workout, and throwing the ball lightly as he recovers from his broken coracoid bone.

Griffin has not played since the season opener. Could he return to the lineup when he's healthy?

"I think it's too early to say," Jackson said.