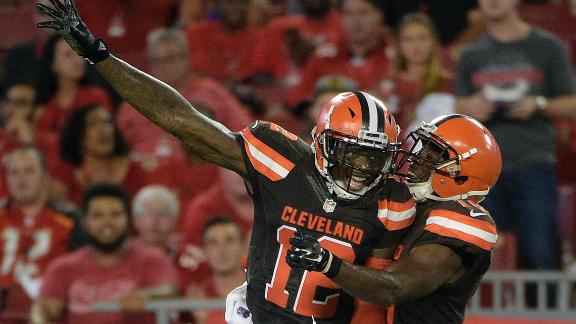 Gordon came back for a ball that was slightly underthrown and, with the help of a disguised push of cornerback Brent Grimes, came down with a 43-yard touchdown catch.

Robert Griffin IIIlaughed and showed a large smile when asked if it was fun to throw to Gordon.

"It's fun throwing to any of those guys when they make plays like that for you," Griffin said.

Friday's game was Gordon's first since Dec. 21, 2014, the penultimate game of the regular season. He was suspended for the season finale and then the entire 2015 season.

Gordon was reinstated in late July by NFL commissioner Roger Goodell but missed the Browns' first two preseason games after reporting with a quad injury. The receiver will serve a four-game suspension to begin the regular season.

"It's just good to see him out there making plays," Griffin said. "Getting an opportunity to get back in the league. We look forward to him making the most of that. I'm really excited for him."

Gordon's first catch Friday went for 44 yards on third-and-8 during the Browns' first drive. He beat Grimes on that play as well, selling Grimes on an out move and then heading upfield. Gordon might have scored had Griffinhit him in stride, but the receiver had to adjust slightly for the ball.

The touchdown reception came with 1:53 left in the half, when Gordon ran a go route and Griffin threw deep down the right sideline. Gordon was able to come back for the ball and make the kind of catch that helped him lead the NFL in receiving yards in 2013.

"He made a tremendous play," coach Hue Jackson said. "It was good just to get him back out there in the game and playing. He did some good things, and there's some things that we'll continue to improve on with him. But I thought it was a good start for him."

After not playing in 27 of the past 32 regular-season games, Gordon's two catches for 87 yards and one TD provide the Browns with a sign that he might not have much rust as he attempts to come back.

Griffin had little success when he wasn't throwing deep to Gordon. Aside from the two completions to Gordon, Griffin went 6-for-12 for 32 yards. He also fumbled once, was sacked five times and did not convert five third downs in a row. His rating was buoyed by the touchdown, as he played the first half and finished with a 108.9 rating.