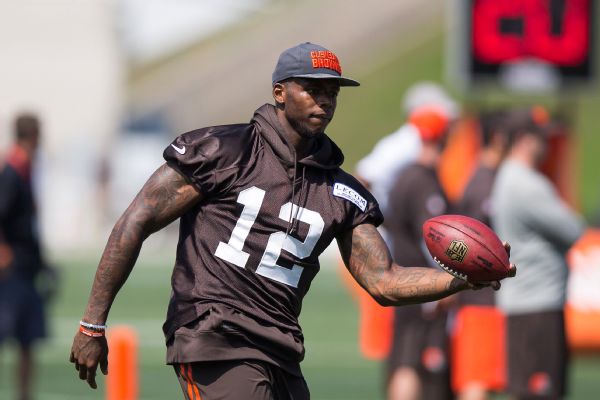 BEREA, Ohio -- Cleveland Browns wide receiver Josh Gordonsays he is entering rehab, an announcement that comes less than a week before he was set to rejoin the team.

"After careful thought and deep consideration I've decided that I need to step away from pursuing my return to the Browns and my football career to enter an in-patient rehabilitation facility," Gordon said in a statement released through the Browns on Thursday. "This is the right decision for me and one that I hope will enable me to gain full control of my life and continue on a path to reach my full potential as a person. I appreciate the support of the NFL, NFLPA, the Browns, my teammates, my agent and the community through this extremely challenging process."

He was eligible to return next week, ahead of Cleveland's Week 5 matchup against the New England Patriots.

Gordon took to Twitter later Thursday, and he again thanked the NFL and the Browns.

He did not indicate why he's seeking treatment. The NFL, in a statement, said its "concern is with Josh's well-being" and declined further comment.

The Browns did not directly address Gordon's future with the team, although it's tough to see him staying in Cleveland given all that has happened off the field.

"I think Josh needs to do what's best for Josh," he told the Browns radio network. "I think we all support him 100 percent. We want the best for him, but we understand at this time he won't be with us, and we move forward from there."

The Browns welcomed Gordon back after the 2015 suspension, but they also drafted four receivers and gave ex-quarterbackTerrelle Pryor a full look at the position.

Their approach was to consider Gordon a bonus but to plan for the uncertainty if he did not return.

"We support Josh in taking this step to seek additional help and treatment," Browns executive vice president of football operations Sashi Brown said in the statement. "His singular focus must be on his own health. We want nothing more than for Josh to be successful personally and professionally and will not comment on his status with the organization at this time."

Gordon's off-field issues began in college. The talented yet troubled wideout was dismissed from the team at Baylor and Utah for failing drug tests. The Browns took him in the second round of the 2012 supplemental draft.

An attorney who represents the woman told Cleveland.com that the DNA test came back Thursday and showed that Gordon is the father with 99.9 percent certainty. Another court hearing is set for Nov. 8.

Despite an 0-3 start to 2016, there had been optimism for the Browns due in large part to Gordon's expected return in Week 5. He led the NFL with 1,646 receiving yards in the 2013 season and looked like he was back in that form during the 2016 preseason, catching two passes for 87 yards and a touchdown in his debut.

Multiple teams reportedly inquired with Cleveland about a potential trade for the wideout late this summer, but the Browns rebuffed them, saying they weren't interested.

Together with Pryor, Gordon could have given Cleveland two playmakers going forward despite injuries to rookie wideout Corey Coleman and quarterbacks Robert Griffin III and Josh McCown.

But those plans now may never come to fruition.