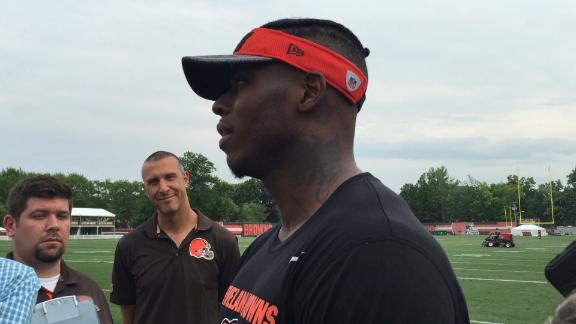 BEREA, Ohio -- Josh Gordon said he returns to the Cleveland Browns a different man, one more willing and ready to accept help and support from others. Those were Gordon's words Thursday in his first public comments since he was reinstated by the NFL from a one-year ban.

Gordon did not apologize for missing the 2015 season for multiple violations of the NFL's substance-abuse policy, but he did say he was "tremendously excited" to be given another chance, and "grateful" the Browns took him back.

"I definitely think I'm a different person," he said. "If you haven't changed over a period of time, that's a bad thing. I think me standing here is a testament to that. Most people might not see it that way. That just comes with the territory of me being who I am, considering my past."

Gordon said he had taken the steps necessary "to better myself as a person off the field just as much as on." He did not answer when asked if he went to rehab, but promised he is much more willing to accept help.

"I have a great support staff here, more so than I've ever felt before," Gordon said. "And it plays a part on both sides. Me wanting to give into that support and allow them to help me and me wanting to be helped as opposed to before me trying to be selfish and do things on my own.

"I want to buy into an organization, a loving, caring, providing facility. And people here that want to do the most that they can, to do everything that they can to help us. Which they were trying to tell us today.

Gordon met with NFL commissioner Roger Goodell July 21 as part of his attempt to be reinstated.

"He was willing to hear me out on all points and I was grateful for the opportunity," Gordon said. "I think I got off my chest things I was desperately trying to convey. I think he understood that."

Gordon admitted he was self-centered when he played for the Browns in the past.

"But things turn around," he said. "People change. It's possible to change. It takes people some learning. But eventually you get to that point. I think I have."

He also will be suspended for the first four games of the 2016 season.

He arrives with a quad injury but ready to get back to practice.

Sashi Brown, the team's executive vice president, said the team was convinced Gordon should be back after a lengthy meeting with him when he returned on Tuesday. Brown said the talented receiver is "at his core a good person," and coach Hue Jackson said what "captured (him) was Josh Gordon as a person."

"There's nothing we're going to be able to do to force Josh to change," Brown said. "The change is going to be within and we will support him through that."

Gordon said nothing he could do at a podium would prove he's different. He simply has to do it in the community and with the team, on and off the field. His locker has been placed next to that of quarterback Robert Griffin IIIin the team's newly renovated locker room.

"He's the reason why I committed to Baylor, in 2009," Gordon said. "That's one of my best friends. It's not a mistake that my locker is next to his. He looks out for me as part of my support staff I've been mentioning. Guys I know I can lean on. I know he's a big brother in that regard."

Gordon also praised Hall of Fame running back and Browns special adviser Jim Brown for his help in the past months, and said several other NFL players had reached out to him -- though he did not specify who. He called his year off "humbling."

"But the point has definitely got across to me, clear as day," Gordon said. "That's not a place you want to go back to or ever get to."