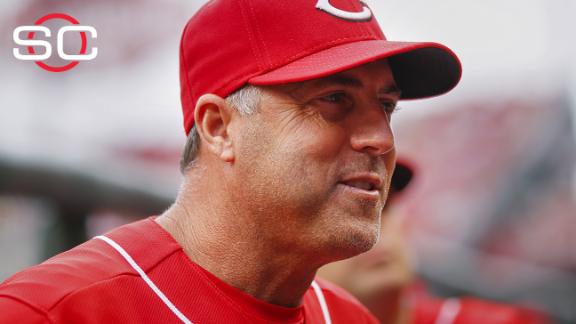 CINCINNATI -- As the Cincinnati Reds fall further from contention in the National League Central, embattled manager Bryan Price said he's confident he's still the "right guy'' to get the team back on a winning track.

The Reds (39-47) are 15 1/2 games behind the St. Louis Cardinals in the division and 7 1/2 games out in the wild-card race. Speculation persists that general manager Walt Jocketty is exploring trades that could send veterans Johnny Cueto, Mike Leake, Aroldis Chapman, Jay Bruce and Marlon Byrd packing while acquiring young talent to hasten a rebuild in Cincinnati.

The Reds reached a low in an 8-1 loss to the Marlins in Miami on Sunday. Cueto knocked over a cooler, sending ice flying in the dugout, after being pulled for a pinch hitter in the sixth inning. The Reds held a 30-minute closed-door meeting following the game, and Price called the team's play "disastrous'' after the Reds were outscored 22-4 in two straight losses over the weekend.

Price said he understands that he's going to be the focus of scrutiny and be perceived as on the "hot seat'' given the team's uninspired play this season.

"I know the job of a manager is to create a healthy environment where you win on a regular basis,'' Price said. "That certainly has been challenging in my two years here. I'm not averse at all to being criticized. That's a part of my job and I understand the speculation. I get it.

"I still feel like I am the right guy [for the job] here. I just feel like I have an understanding of what we need to do to turn the corner and to be the type of team and organization we aspire to be.''

The 2015 season has been challenging for MLB managers. Milwaukee's Ron Roenicke, Miami's Mike Redmondand San Diego's Bud Black were all fired before the All-Star break, and Philadelphia's Ryne Sandberg walked into the team's offices and submitted his resignation three weeks ago in advance of the Phillies bringing in a new top baseball executive, Andy MacPhail.

In Cincinnati, Price has had to deal with periodic speculation that Hall of Famer Barry Larkin is waiting in the wings as the next in line to manage the Reds. Larkin, who grew up in Cincinnati and played with the Reds from 1986 through 2004, interviewed for the Tampa Bay Rays' managing job in November and has a strong relationship with Reds owner Bob Castellini.

Price weathered one storm in April when he went on a profanity-laced tirade with reporters that quickly spread all over the Internet. Another round of speculation about his job status occurred in late May, when he was ejected during a lineup card exchange at home plate.

Castellini and Jocketty continued to support him during both episodes.

"I never felt I was going to come in here and have everybody think I was the best thing since sliced bread,'' Price said. "I expected to be criticized. I've seen it with every manager I've worked for, and I've been criticized as a pitching coach. It's part of the deal when the team isn't playing well.

Price, 53, served as pitching coach of the Seattle Mariners, Arizona Diamondbacks and Reds before succeeding Dusty Baker as the 61st manager in Reds history in October 2013. His three-year contract with the team runs through 2016.

"I didn't lobby to get this job and I won't lobby ever to keep it,'' Price said. "I think it comes down to the body of work and how this team responds. If I feel like we're moving in the right direction, then I'll stay. If it doesn't, then I won't. I don't get caught up in it. But it does bother me that my family and people who care about me have to read things that aren't based on fact.

"At some point in time, my managing career is going to end. When that day is, nobody knows. But some of the hits you take along the way, they sting.''