Butler hangs on for upset of No. 5 North Carolina in Battle 4 Atlantis 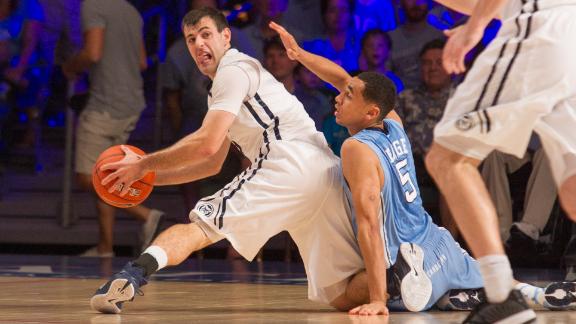 The Bulldogs did more than enough to take down No. 5 North Carolina.

Alex Barlow and Kelan Martin each scored 17 points, and the Bulldogs grabbed 29 offensive rebounds to hold on to upset the Tar Heels 74-66 on Wednesday in the opening game of the Battle 4 Atlantis.

"This is a proud program with tremendous heritage and we're trying to do the very best with what's in front of us," Butler coach Chris Holtmann said.

The Bulldogs shot 31 percent, including a staggering 7 percent in the final 8 minutes, missing open shots from near and far all afternoon.

"I know our guys would have loved to make shots," Holtmann said.

Kameron Woods had 13 rebounds and Roosevelt Jones scored 12 for the Bulldogs (4-0), who topped the Tar Heels for the second straight time. Butler beat North Carolina at the Maui Invitational in 2012.

Marcus Paige shook off a slow start and scored 18 for North Carolina (3-1). Brice Johnson added 11 for the Tar Heels.

"They outplayed us and definitely outcoached us," North Carolina coach Roy Williams said. "And we had some chances at the end ... but again, you have to congratulate their defense for doing such a good job."

"They got 15 more shots than us and we both turned the ball over 19 times," Paige said. "A Coach Williams team, if you look at the backboards they usually tell the story, and we got dominated."

Paige was ice-cold early on a steamy day on the island, missing nine of his first 10 shots. But a pair of 3-pointers followed by a three-point play in a late 3-minute span pulled North Carolina within 69-66.

The Heels got no closer.

Barlow made two quick 3-pointers after halftime, putting North Carolina in a second-half hole for the first time this season.

"We knew we needed to come out in the second half and try to get on them early," Barlow said.

The Tar Heels missed nine of their first 14 free throws in the second half, going 1 for 13 from the floor during one stretch. They finished 18 for 32 from the line.

"The game of basketball is pretty simple," Williams said. "Just put the ball in the hole. And we didn't."

North Carolina: F Kennedy Meeks blocked a career-high five shots. ... The Tar Heels had first-half scoring runs of 11-0, 12-0 and 11-0 in their first three games, but managed only one stretch of five straight points in the first half Wednesday.

Butler: The Bulldogs had lost their last seven games against Top 25 teams. ... Four of Butler's starters Wednesday played when the Bulldogs beat North Carolina in Hawaii two years ago. ... Starting guards had averaged 8.0 points against the Tar Heels in the season's first three games. Barlow had 11 by halftime.

Each of Butler's starters came into Wednesday shooting at least 50 percent this season. None got there Wednesday, and the Bulldogs' first string shot a combined 16 for 57.

Williams pointed out postgame how his Kansas team lost to Ball State in the opening game of the Maui Invitational to start the 2001-02 season and wound up in the Final Four. "There's a lot more important things going on," Williams said.

North Carolina: Faces No. 22 UCLA in Thursday's consolation round.

Butler Beats UNC In The Bahamas
Alex Barlow and Kelan Martin each scored 17 points in Butler's 74-66 win over North Carolina.

Butler Beats UNC In The Bahamas
Alex Barlow and Kelan Martin each scored 17 points in Butler's 74-66 win over North Carolina.