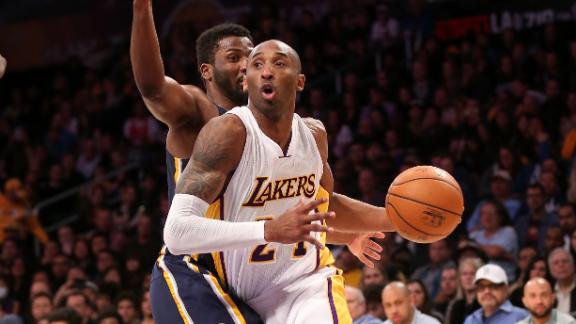 LOS ANGELES -- Lakers coach Byron Scott, after expressing befuddlement at a flagrant foul called on one of his players in a win Sunday over the Indiana Pacers, said college basketball is more aggressive and "much more physical" than the NBA.

The foul, a flagrant 1, was called on Lakers forward Carlos Boozer after his hard shove sent Pacers center Roy Hibbert to the court with 5:54 left in the fourth quarter of the Lakers' 88-87 win over the Pacers at Staples Center.

Hibbert came to his feet and charged Boozer, and the players had to be separated. Hibbert was called for a technical foul on the play.

"I asked all three referees to explain to me what a flagrant foul is from now, because I have no clue. I really don't," Scott said.

"I haven't looked at it, either. They told me it was unnecessary, basically, pushing him down, as far as what he did. I said, it's still a push. But college ball is more aggressive than we are and much more physical than the NBA right now."

"I wonder what the league is coming to when that's a flagrant foul. It's a shame that has to be a flagrant," Bryant said after scoring 20 points, including hitting the go-ahead shot with 12.4 seconds left. "It's a foul. It's a technical foul, maybe. That's about it. But a flagrant foul? My goodness."

Bryant added: "That might not have even been a foul when Byron was playing. The game has changed a lot."

Scott played during the 1980s, winning three championships with the Lakers.

Boozer and Hibbert said little about the incident after the game.

"Started acting like a tough guy, and we all know he's not a tough guy," Boozer said after the game, according to CBS Los Angeles.

When asked about the skirmish, Hibbert said, "I don't want to talk about Carlos," according to the Indianapolis Star.