There wasn't a singular moment when he came to that realization, but on his way to setting the Pac-12 single-season records for touchdown passes (43) and passing yards (4,719) this season, it became apparent.

"The game really started to slow down for me, and I was able to see things quicker and learn a lot of stuff this year," Goff said at a news conference Thursday to declare for the draft formally. "I feel like at the college level I've done a lot and it was time to take the next step.

"You just know when you're ready."

Goff was projected to the San Francisco 49ers, the team he rooted for growing up, with the No. 5 overall pick in ESPN draft analyst Todd McShay's first mock draft. He is the No. 10-ranked player on Mel Kiper Jr.'s Big Board, second among quarterbacks behind Paxton Lynch of Memphis.

In the evaluation he received from the NFL, Goff said his grade was split between the first and second rounds, but that he did not take that feedback into account when making his decision.

"Those are typically pretty conservative," Cal coach Sonny Dykes said of the formal draft evaluation. "The thing about NFL draft is one team needs to like you. I'm confident one team will like Jared ... pretty high, I would imagine."

Dykes and Goff first discussed the potential of his leaving early over the summer, when Dykes suggested he talk about the situation with his parents and have a plan in place.

"I think he handled it extremely well," said Dykes, who added that it became clear over the course of the season that Goff would not be back.

Goff, who is from nearby Novato, California, originally committed to former coach Jeff Tedford but stuck with his commitment after Dykes and his staff arrived before the 2013 season. He enrolled early and joined a three-man quarterback competition with redshirt freshman Zach Kline and junior Austin Hinder in which Kline, one of the most highly regarded recruits to ever sign with Cal, was considered a heavy favorite.

"When we chose [Goff] to be the quarterback, I don't think it was very popular decision," Dykes said. "I think certainly since I've been at Cal, we probably got more negative stuff from people about the quarterback choice than we've ever gotten about anything. It was a pretty unpopular decision at the time."

In Goff's first year as the starter, Cal went 1-11 and improved to 5-7 last season before finishing with an 8-5 record this year.

Dykes thinks Goff's path has uniquely prepared him for what awaits in the NFL.

"I think he's as ready as anyone can be, just going through what he has gone through at Cal," Dykes said. "It hasn't all been easy. That's a big part of growing up -- becoming a man, becoming a NFL quarterback is ... it's not going to go down like you want it to go down."

If Goff ends up with a team in a rebuilding mode, Dykes said the quarterback has proved he's equipped to handle that kind of a situation.

"A team is drafting high because they haven't had success, so you're going to have some growing pains and the fact that he came to Cal and was 1-11 as the starter -- he's had that experience," Dykes said. "He's had to deal with failure and he's also had to deal with success. That helps prepare a guy mentally and emotionally as well as anything, when you've gone through what Jared has gone through."

Goff finished his career with 12,200 yards passing and 96 touchdown passes.

He signed with Rep1 Sports, will be represented by agent Ryan Tollner and will prepare for the NFL combine at the Rep1 facility in Irvine, California. 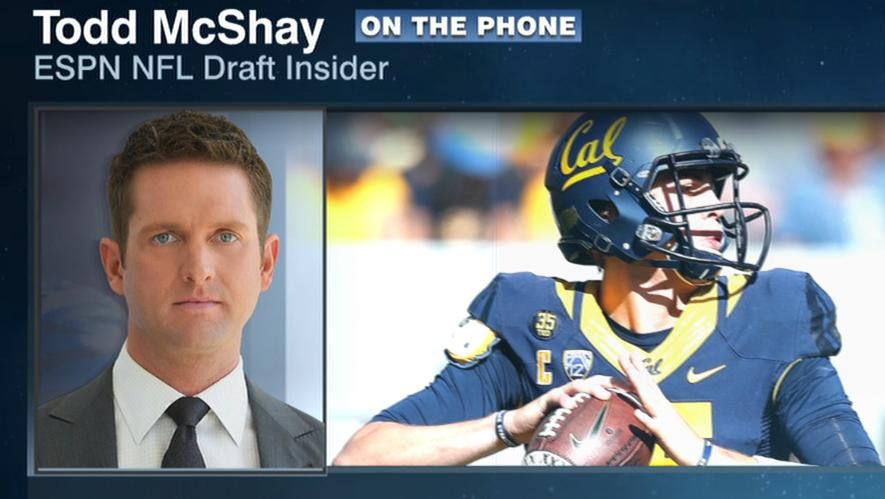