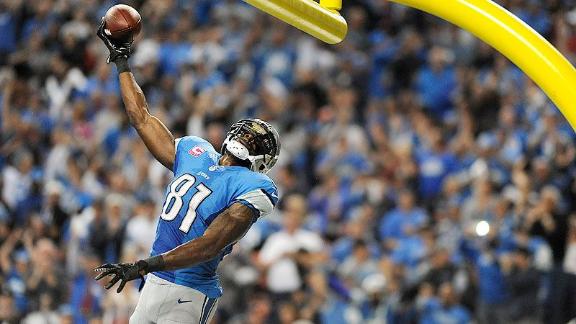 Calvin Johnson has no plans to stop dunking the football over the crossbar.

But the Detroit Lions star receiver does have a plan to avoid being penalized for one of his favorite post-touchdown celebrations.

The NFL decided this offseason to add the goalpost celebration to its list of post-touchdown actions that will be penalized for unsportsmanlike contract.

Under the new rule, the goalpost is considered a prop and cannot be used to celebrate a touchdown.

The 6-foot-5 Johnson has caught 66 touchdown passes in his seven-year career with the Lions and frequently dunks the ball over the goalpost after scoring.

Johnson had 84 catches for 1,492 yards and 12 touchdowns last season despite battling nagging injuries throughout the year.

Johnson, who is recovering from surgeries on his knee and finger, did not say when he would return to the field this offseason. But the four-time Pro Bowler told the Free Press that his knee is feeling better.

"It feels good," he told the paper. "It's definitely coming around. We've got all this time right now to get it strong, take our time. There's no need to rush back."