Cam Newton gets first roughing the passer call since 2014 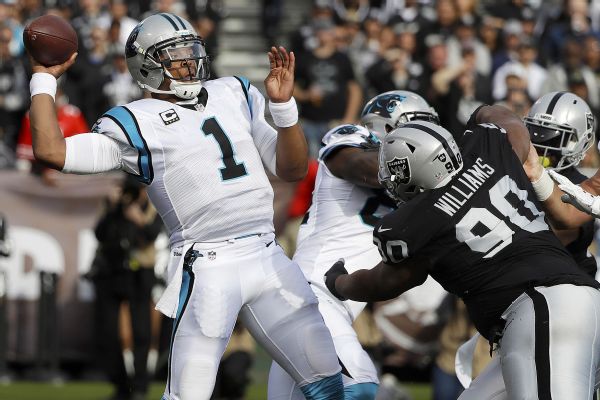 OAKLAND, Calif. -- The Oakland Raiders on Sunday became the first team called for a roughing the passer penalty against Carolina Panthers quarterback Cam Newton since Tampa Bay in Week 15 of the 2014 season.

Newton criticized officials about the lack of no-calls following an Oct. 30 victory against Arizona in which he took a shot below the knees while in the pocket.

He said after the game he didn't feel safe and that he wanted to talk to NFL commissioner Roger Goodell, which he did two days later.

Newton said it was a good conversation and that he "got my point across."

"Illegal hits for me start in the pocket," Newton said after the talk. "I know when I am running the football, I am on my own. I understand that. I'm not a dummy or oblivious to the fact that I run the football more than any quarterback who has ever played this game. I mean, duh. I'm fine with that.

Another was negated in Week 8 against Arizona.

Carolina coach Ron Rivera sent another no-call that he questioned to the NFL for review after a November victory at Los Angeles. The league ruled the hit was legal.