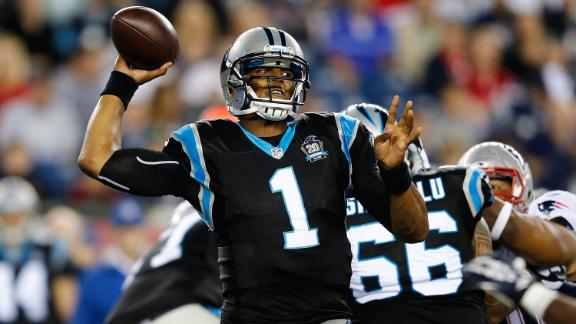 Newton was injured during Friday night's 30-7 preseason loss at New England. He will not play at Pittsburgh on Thursday night.

"There's no doubt in my mind,'' Newton said Wednesday.

The fourth-year player also said the injury hasn't been a setback in developing chemistry with a new group of wide receivers after losing his top four from last season.

He is scheduled to make the trip to Pittsburgh to stay mentally connected as he has all week.

Newton said the fracture was to "ribs'' and not a rib as coach Ron Rivera has said all week. He said the injury will not be a setback in his preparation for the season

"No setback at all,'' said Newton, who has not missed a start since Carolina made him the first pick of the 2011 draft. "I'm excited about the opportunity, and each day brings more confidence that I am close to 100 percent.''

Newton moved better Wednesday than he had the previous three days, throwing a few underhanded passes during a short walk-through before the team boarded a plane for Pittsburgh.

His upper body didn't appear to be nearly as stiff as he walked.

"My body feels better,'' said Newton, who added he's had more painful injuries during his career. "It's obvious my ribs [were] hurting. I'm moving forward trying to stay positive and optimistic about this whole process. It's given me even greater focus on trying to heal my ankle at the same time.''

Newton missed most of the Panthers' offseason workouts recovering from left ankle surgery in March. He was turned loose to run before his first preseason start on Aug. 17 against Kansas City.

The rib injury occurred when New England linebacker Jamie Collins stepped on Newton's back as the quarterback awkwardly dived forward at the end of a 7-yard scramble. Twenty-four hours earlier, Newton said he didn't plan to change his style and slide to protect the ankle.

He indicated on Wednesday adding a slide to his repertoire isn't part of his plans.

"I am who I am,'' Newton said. "Things do happen. One thing you know playing this game is you will get hurt sooner or later. This is a physical sport and needs to be played that way.''

While Rivera would like to see his quarterback slide more, he won't ask him to change.

"He said it about as well as you can,'' Rivera said. "This is a physical game and it's got to be played physically. Hopefully, he'll learn, but he is who he is. That's why he has so many great moments for us is that he tries to win at everything he does.

"Should he slide? Yeah, I'd like to see him slide. But at the same time I want him to play the way he plays best.''

Rivera has no concerns that Tampa Bay will target Newton's ribs or that the ribs will be an issue. He reminded that defensive tackle Casey Walker suffered a similar injury two weeks ago and will suit up against Pittsburgh.

Newton will be re-evaluated Saturday and is expected to return to practice full time on Monday. Rivera said the game plan won't change when it comes to running the read option, in which Newton becomes a runner.

"All along, the one thing he's said was we're going to do what we do,'' Rivera said.

Newton: No Doubt I'll Be Ready Week 1
Panthers QB Cam Newton says he will be ready to start Week 1 despite fracturing his ribs.

Concern In Carolina?
Dr. Mark Adickes talks about how Panthers QB Cam Newton's fractured rib may impact his performance, and Ron Jaworski discusses the time Newton will miss with his new receiving corps.

Who Will Protect Cam Newton?
David Newton discusses the Panthers' offensive line questions and the team's need for consistency.