Cam Newton: Not worried about deal 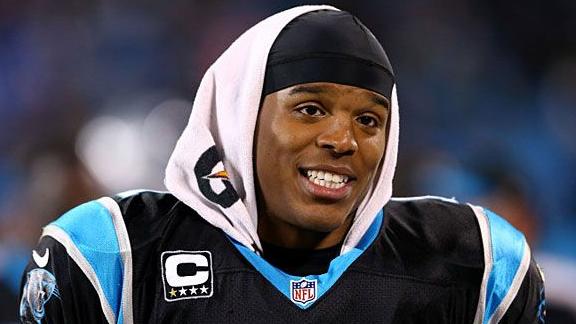 CHARLOTTE, N.C. -- Carolina Panthers quarterback Cam Newton says he is not "terrified'' that the contract San Francisco 49ers counterpart Colin Kaepernick received will impact his next one.

"I'm not terrified of anything,'' Newton said Wednesday.

The Panthers have the rights to Newton through the 2015 season, but they've expressed an interest in signing their franchise quarterback to a long-term deal. Negotiations have not begun.

Kaepernick signed a six-year deal worth $110 million earlier this month with the 49ers. The contract reportedly included a record $61 million in injury guarantees.

On Tuesday, the NFL Network reported that people close to Newton are terrified that Kaepernick's deal might set a standard for the Panthers to use in their dealings with the QB. Specifically, the report said Newton would want much more than the $13 million in guaranteed money Kaepernick received up front.

Newton underwent surgery to tighten the ligaments in his left ankle in March. He was expected to be out until training camp, but he hasn't ruled out participating in next week's mandatory minicamp.

"Physically, I'm coming along fine,'' said Newton, who has been on the field for six of the team's OTAs. "I'm on pace to be right where I'm expected to be. Mentally, I'm bored. Watching film, going over those things, becomes monotonous.

"I know it's making me better. ... But six or seven weeks of the same thing, watching game film after game film, making the right corrections and helping those guys out at practice, you kind of feel [like], 'Man, I wish I could be out there.'''

While Newton is anxious to get on the field next week, he also is wary of setbacks.

One reason Newton is so anxious to return is to prove he and his new group of receivers are better than critics are saying. The Panthers lost their top four wide receivers from last season. Steve Smith, the team's all-time leading receiver, was cut and the other three signed with other teams in free agency. They were replaced with free agents Jerricho Cotchery, Jason Avant, Tiquan Underwood and first-round draft pick Kelvin Benjamin.

"Those guys have already accepted the challenge,'' Newton said. "You don't need to go in there and tell those guys, 'Hey, you're projected the sorriest receiver [group] in the NFL.' We already know [what people are saying].

"But with that, those guys have that fire in their eyes. I'd rather for those guys to be like that and for them to go out and bust their tails like they've been doing. It's kind of like a slap in -- not only their faces -- but mine, as well.''

Newton said the things people are saying about Carolina's receivers being old -- Cotchery and Avant are 31 -- and inexperienced with no proven No. 1 is "the utmost disrespect.''

"For you to hear some things that's said, it's actually as if you're being picked up from the street and saying, 'Hey, you want to play receiver?''' Newton said. "But we accept the challenge. We have fun with it. That's the chip on our shoulder.'"

Newton doesn't have a chip on his shoulder regarding Kaepernick's deal.

"I'm excited about what Colin Kaepernick has done because he's a friend of mine,'' Newton said. "Those circumstances are different for the 49ers than it is for the Panthers -- different management, different situations.

"For me being the Carolina Panthers quarterback, it's my obligation to be 100 percent -- no limping, no gimping, no grimacing or nothing when it's time for me to be on that practice field.''

Newton Not Concerned About Next Contract
David Newton discusses comments made by Panthers QB Cam Newton that he is more concerned about getting his ankle healthy than he is about how his next contract will be impacted by Colin Kaepernick's recent deal.