Cam Newton out with concussion; Derek Anderson to start at QB

CHARLOTTE, N.C. -- Carolina Panthers quarterback Cam Newton officially has been ruled out for Monday night's NFC South game against the Tampa Bay Buccaneers with a concussion.

Derek Anderson will make his third start for Carolina (1-3) since joining the team in 2011. He was 2-0 in his other two starts, both against the Buccaneers (1-3) in 2014 when Newton was injured.

"We're going to do what we do, play who we play,'' Carolina coach Ron Rivera said after Saturday's practice that was moved inside to the Charlotte Convention Center because of heavy rain and wind from Hurricane Matthew.

"We've done this before. It's that next man up mentality. We've done it before.''

Rivera had no update on Newton's status in the concussion protocol other than "he's progressing.'' He said there is no way to predict whether Newton will be available for next week's game at New Orleans.

"Until I see him on the field, I don't really know,'' Rivera said. "A lot of the stuff he did today he did with the trainers and the doctors, which is good. Hopefully, the next step will progress and we'll go on.''

Rivera said whether or not Newton is on the sideline on Monday night is up to the doctors and whether he can handle the excitement.

Asked how Newton is handling not being able to play, remembering how tough the quarterback took it when he was held out of the 2014 opener at Tampa Bay with fractured ribs, Rivera said "he's antsy.''

Newton suffered the concussion in the fourth quarter of Sunday's 48-33 loss at Atlanta when linebacker Deion Jones delivered a legal helmet-to-helmet hit as the NFL MVP approached the goal line on a two-point conversion run.

Anderson finished the game, completing 17 of 23 pass attempts for 172 yards and two touchdowns.

He completed 49 of 74 pass attempts for 501 yards and three touchdowns with no interceptions in his other two starts for the Panthers.

He has a career record of 20-25 as a starter, most of those coming during his first four seasons with the Cleveland Browns. He was selected to the 2007 Pro Bowl after going 10-5 for the Browns.

"I don't know if there's a better backup situation in the league,'' Carolina tight end Greg Olsen said. "Guys have a lot of respect for him. He's been in the fire as the starter, as a backup in places he's been. Every time he's coming in he's delivered.

"He's always there when we've needed him.''

One of Anderson's strengths is a quick release. One of Carolina's weaknesses this season has been its inability to handle pressure, giving up 13 sacks, a rate of 3.25 per game that is tied for the second highest in the league.

Newton sometimes holds onto the ball too long under pressure trying to make something happen.

"You know DA is going to get it out quick, quicker probably than Cam,'' wide receiver Kelvin Benjamin said earlier this week. "We're going to have to be fast on our routes.''

Newton averages 2.57 seconds to release the ball, which ranks 26th in the NFL. That number is a slight improvement from last season's 2.61 average for Newton, but still higher than the league average of 2.46 seconds.

"I think he takes what he can get when he plays," Rivera said of Anderson. "Unlike Cam, who is going to stand tall in there and maybe skip an opportunity and work something downfield, Derek is going to be quick to pull the trigger and make a quick decision and go forward."

Newton leaves game with concussion after hard hit at goal line
Panthers QB Cam Newton is hit hard at the goal line while running in a two-point conversion. Newton would leave the game with a concussion and has been ruled out for Monday night's matchup against Tampa Bay. 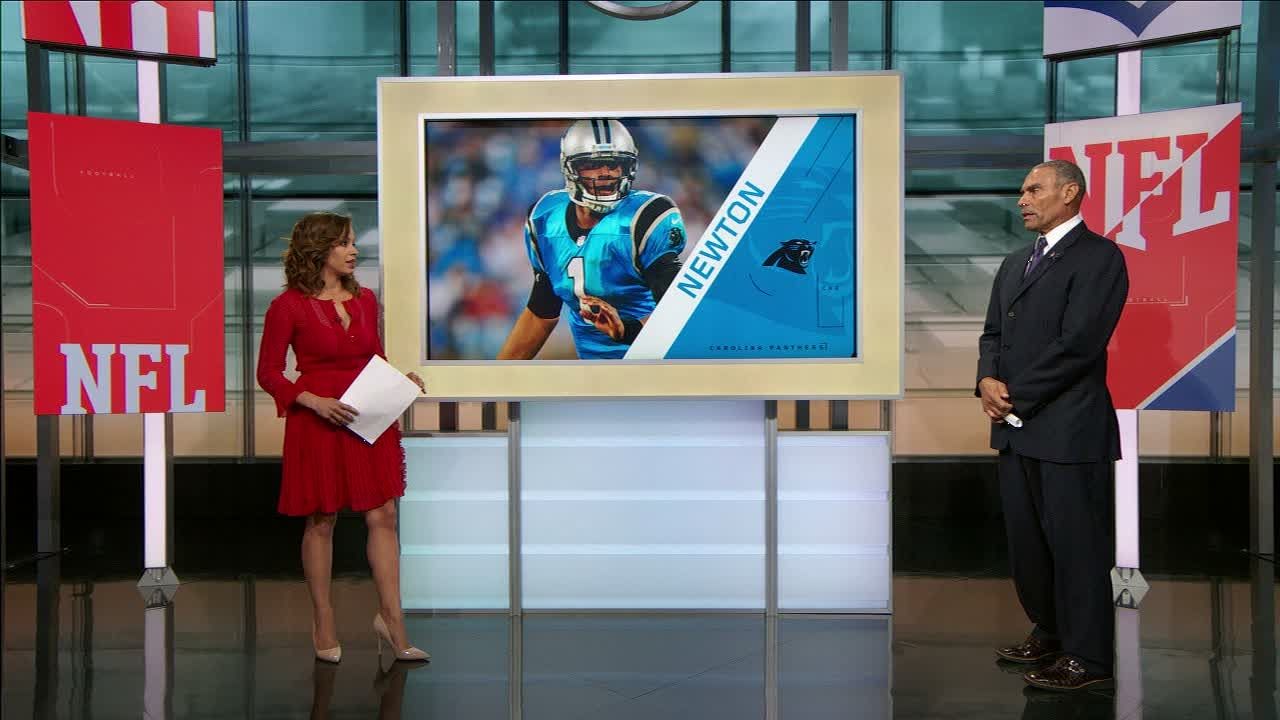