Cam Newton says he's focused only on Week 2: 'I gain nothing ... talking about the past' 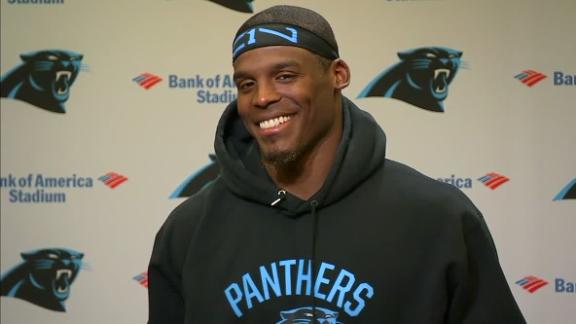 CHARLOTTE, N.C. --Carolina Panthers quarterback Cam Newton wasn't in the mood on Wednesday to talk about helmet-to-helmet hits, fines, the concussion protocol or anything that had to do with last week's 21-20 loss to Denver.

"We are dwelling on something I don't want to dwell on" the NFL MVP said as he looked ahead to Sunday's home opener. "My focus is theSan Francisco 49ers' defense and the team that shut out the Los Angeles Rams. I gain nothing ... talking about the past.

"The NFL is going to do their investigation and I know wholeheartedly that [head athletic trainer] Ryan Vermillion and his staff did an exceptional job of protecting me along with other players. My focus is trying to win football games through all of the hits and everything else. My job is to collect wins."

That was Newton's response to almost every question about what happened at Denver, including the fines the NFL gave to Denver safety Darian Stewart and linebacker Brandon Marshall for illegal helmet-to-helmet hits.

Stewart was fined $18,231 for his hit in the final minute that left Newton facedown in the grass while teammates and officials ran over to check on him.

Marshall was fined $24,309 for a third-quarter hit even though a flag wasn't thrown.

Two other helmet-to-helmet hits on Newton didn't draw a fine or a penalty.

Newton didn't have an opinion either way.

"My job is to win football games for the Carolina Panthers, and that's all I'm trying to do," he said. "I'm not trying to be a lawyer or trying to lobby for this person or that person. Everybody has a job to do from refs to the commissioner to head coach to general managers.

"But my job as a quarterback is dissect the San Francisco 49ers defense this week and make sure the Carolina Panthers fans are happy at the end of Sunday."

Newton's teammates haven't been so quiet. Several have said officials treat their quarterback unfairly when it comes to such hits.

"He's treated like a running back -- and he's not," Pro Bowl tight end Greg Olsen said Monday. "They say, 'Oh, but he runs the ball so much.' Every single one of those times [he had a helmet-to-helmet hit] he was playing quarterback.

Carolina center Ryan Kalil said Tuesday on SiriusXM Mad Dog Sports Radio that the NFL "has got to do a better job" at protecting quarterbacks.

"If they are going to sit in there, in the offseason especially, and have these rally cries about player safety, player safety, but they're not going to do anything about it on the field, then it is just lip service," Kalil said.

Kalil said on Wednesday the answer is full-time officials.

Carolina coach Ron Rivera said Newton doesn't get the benefit of calls because at 6-foot-5 and 260 pounds, he's bigger than most quarterbacks and because he runs so much in the read-option offense.

"There's a little bit of prejudice to that," Rivera said last week. "It's kind of like what happened to [former NBA star] Shaquille O'Neal. Here's a big, physical basketball player and he goes to set a pick, a guy falls down and they call a foul on him. He goes to shoot a little layup and gets hacked and hammered and they don't call it."

Rivera said Newton looked good in Wednesday's practice. Newton said he felt "unbelievable" six days after being hit 17 times -- the second-most of his career -- on runs, sacks and passes.

From his viewpoint, the referees and officials did everything they were supposed to throughout the game as it pertained to checking for a concussion.

"I was asked on the sideline about awareness and my ability to keep going from the referee, as well as the training staff," Newton said. "There is no doubt that everything will work out in itself. There is no question that I took a couple of hits to the head, but I don't think I showed any signs of being concussed.

"It was no wooziness. ... I understand I was kind of hurt, but that comes with football and it being a contact sport."