Capitals' T.J. Oshie is ready to return from concussion 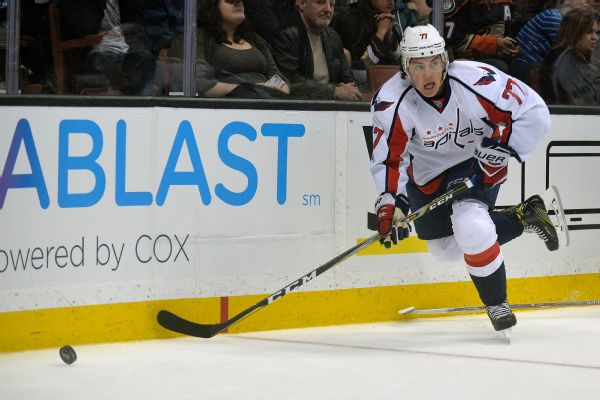 ESPN
ARLINGTON, Va. -- T.J. Oshie has had concussions before, so he knew what not to do this time.

After taking a hit to the head from San Jose's Joe Thornton on Dec. 6, the star winger didn't push Washington Capitals trainers to get back on to the ice.

"I knew I wasn't right," Oshie said Monday. "You always want to get back earlier, but when you're dealing with the head I think it's better safe than sorry."

Oshie is ready to return after missing six games with what he said was his fourth documented head injury but his least severe one. Barring a last-minute setback, the 30-year-old Oshie is expected to rejoin the lineup Tuesday night in Dallas.

"I'm pretty optimistic that I can go here, but we'll go through all the right steps before we make it official," Oshie said, referring to one final conversation with trainers. "I think you always want to get back earlier as a player and we've got a good staff and good docs that hold you back until you're ready."

Despite missing time, Oshie still leads the team with seven power-play goals and is tied for third with 10 overall. Washington has won 11 of 14 and is 5-1-0 without Oshie, so he hopes he doesn't "mess up the mojo."

Coach Barry Trotz thinks Oshie's return, likely on the second line with rookie Jakub Vrana and center Evgeny Kuznetsov, could change the chemistry for a couple of games but isn't worried about that. Oshie is in the first season of a $46 million, eight-year contract, so he's going to play when he's able.

"T.J.'s a real good player for us, he's a big part of what we do and if he's healthy and ready to go, I have no problem putting him in the lineup." Trotz said. "He's been a terrific player for us since he's been here."

Trotz expects a final decision Tuesday morning, though Oshie participated in his first full practice with teammates Monday and returned to his usual spot on the first-power-play unit. Oshie began skating solo Dec. 10 and has made the necessary steps through the NHL's concussion protocol.

As the Capitals embark on a three-game pre-Christmas road trip at Dallas, Arizona and Vegas, Oshie doesn't expect to change his game and isn't concerned about coming back from yet another concussion.

"I don't really worry about too much stuff," Oshie said. "Obviously, it would be better to have zero, but it's a physical game. I like to get out there."

Trotz said Oshie's return allows for more roster competition. Devante Smith-Pelly looks like the odd forward out against the Stars, though the healthy scratch role could be a rotation over the next several games.

"It'll all be based on sometimes opponent, sometimes what they bring to the hockey club," Trotz said. "Their play will dictate that, and if everybody's playing well I just have to make a tough decision."