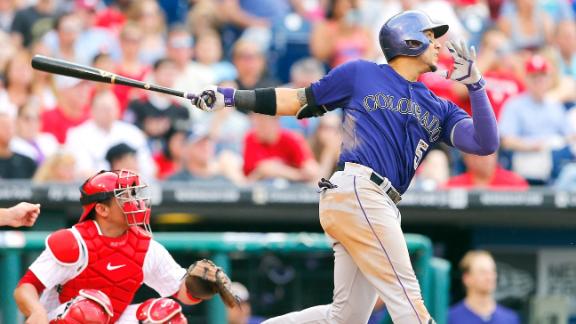 The team made the announcement Thursday night, saying Gonzalez will have his patella tendon repaired.

It's been an injury-riddled year for Gonzalez, who is on the disabled list with not only an aching left knee but a sprained right ankle. He was out earlier this season after doctors found and removed a small tumor in his left index finger.

"I still have that fire, that passion," Gonzalez told reporters, according to The Denver Post. "But it's limited. I show up the first game and go 3 for 5 with a home run, and I extend a single into a double. And then the next day, I feel like I got hit by a bus."

With all his ailments, Gonzalez struggled at the plate. He hit .238 with 11 homers and 38 RBIs.

"It's hard to play that way, when you go out there and feel like, 'I can't move today. I just hope nobody hits the ball where I'm playing right now,' " he said. "When your body gets stressed, your mental part gets affected, too.

"Instead of thinking about the way they're pitching me or if the ball is hit to me, I'm gonna throw it this way. All I was thinking was, 'My knee hurts; I don't feel good.' The mental stress is big."

"Everyone felt like that might be the case, that we might not have them for the rest of the season," Rockies manager Walt Weiss told reporters, according to The Denver Post. "And unfortunately, that's what it's gonna be."