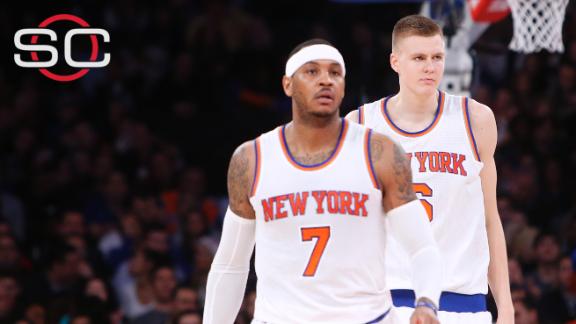 GREENBURGH, N.Y. -- Carmelo Anthony made one thing clear after meeting with New York Knicks management on Thursday: He wants the club to "take advantage of this window that I have" when making personnel moves this offseason.

Anthony met with team president Phil Jackson and general manager Steve Mills on Thursday as part of the club's traditional exit meetings between players and management. Anthony said the trio had a "very honest" conversation about the future of the franchise.

The Knicks and Jackson face a pivotal offseason. They will have at least $18 million to spend in free agency this summer and have a coaching vacancy to fill.

On Thursday, Jackson said interim coach Kurt Rambis will interview for the vacancy. Jackson also suggested that he will speak to other candidates with whom he has a relationship.

"People I probably know will be in the interview process," Jackson said. "I will reach out to make connections to some people. But I've been in this position, in the NBA, over 50 years. And I've seen a lot of situations where coaches end up coming in without [being] simpatico with the general manager, and those things don't work well. So someone who has compatibility with what I do as a leader would have to be in sync with what we do."

Sources told ESPN.com earlier this week that the Knicks are interested in ex-Cavaliers coach David Blatt, among others.

Jackson wouldn't discuss specific candidates Thursday, but he reiterated that he is committed to running the triangle offense.

Jackson ran the triangle with the Chicago Bulls and the Los Angeles Lakers, winning a combined 11 titles in his tenure.

The Knicks, though, have struggled the past two seasons, losing a total of 115 games. Some have attributed those struggles to the complexity of the offense; others have pointed to a lack of talent.

Asked about the critics of the offense, Jackson said, "Who are these people? Why would they even say that? Do they have 11 championships to show you when they talk about that? They got a lot of excuses. That's the way it is."

Rambis has said that finding players who work well in the triangle will be a priority this offseason. Anthony, though, said he believes there is a "fine line" between emphasizing the system and going after the top talent on the market regardless of how they might fit into the system.

"I don't think guys want to kind of be re-educated on, kind of, the system and how to play the game of basketball and be in a position that they might not be comfortable and confident in," he said. "So I think it's a fine line between going after guys who you feel can actually fit in the system and going after guys who can just play basketball and know how to play the game of basketball."

Anthony also said he wants the Knicks to build a team that can contend in the Eastern Conference next season.

"What is successful for us as the New York Knicks?" he said. "I think that is kind of the question that we have to ask ourselves as a whole organization. ... Getting back and being in the postseason, that's success for me. And not just sliding in and barely getting into the eighth seed. That is not success for me. Being in there, having some type of prominence, having a chance to compete to the next round and move further, that is success for me."

Anthony, a 13-year veteran, has a no-trade clause in his contract. He has been asked several times over the past few weeks about the possibility of asking for a trade out of New York this summer.

"As of right now, I'll be here," he said. "No conversation has taken place as far as me leaving or me wanting to leave. I think everybody knows how I feel about being here with this organization in New York, playing for the Knicks. I think nobody should question that."

"For me, I kind of see it differently," he said. "Yes, we've made progress. We still haven't made progress enough to get to the postseason, to get to the playoffs. For my first 10 years in this league, I played in the postseason, I played playoff basketball. So to not experience that over the past three seasons, it makes you question a lot. It makes you think a lot. ... My only thing, my only motive, is to win."