Carmelo Anthony refers fan to James Dolan: 'Ask for your money back' 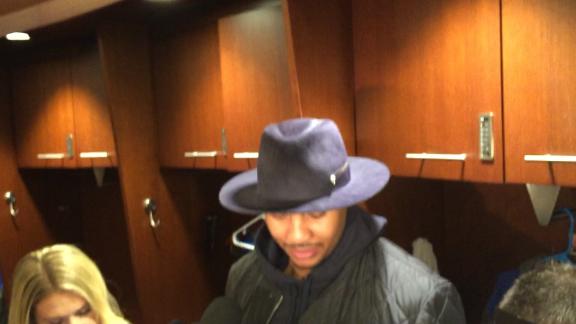 NEW YORK -- Carmelo Anthony had a strong response to a fan who was heckling him late in the New York Knicks' 104-85 loss to the Portland Trail Blazers on Tuesday night.

"Look, the owner's right there," Anthony said he told the fan. "Ask for your money back."

The fan was standing a few rows behind Knicks owner James Dolan in a section of seats adjacent to the Knicks bench. During a timeout with 4:15 to play in the game, the fan started yelling in Anthony's direction. Anthony, sitting on the bench, gestured back and eventually stood up and appeared to address the fan.

"He kept calling my name, calling my name, saying, 'You guys suck, you guys suck,'" Anthony said after the Knicks' 19-point loss to Portland. "At that point, I was trying to gather myself, and I turned around. All I did was point at Dolan and told him, 'Look, the owner's right there. Ask for your money back.' He's calling me and telling me he's never coming to another game and we suck. Just don't want to hear that. I pointed to the owner and told him, 'You deal with that with him. Maybe you can get your money back.'"

Security guards surrounded the fan during and after his interaction with Anthony and appeared to escort the fan from his seat.

On Wednesday afternoon, Anthony apologized for his actions in a statement:

The run-in happened at the tail end of another frustrating night for Anthony and the Knicks. New York has dropped 15 of 18, including its past two games by an average of 18 points.

Anthony said this season has been more frustrating than last season's 17-win campaign because New York experienced a degree of success. The Knicks were 22-22 on Jan. 20.

Anthony added that he's concerned with the recent losing and its potential impact on the competitive spirit of his teammates.

Melo to fan: 'Ask for your money back'
When confronted by a heckling fan saying the Knicks suck, Carmelo Anthony responds by telling the fan to talk to owner James Dolan about getting his money back.
Related topics:
sportsespnhecklerfannew york knickscarmelo anthonynbajames dolan
Copyright © 2020 ESPN Internet Ventures. All rights reserved.
More Videos
From CNN Newsource affiliates
TOP STORIES