Carmelo Anthony says he's frustrated by a lack of calls 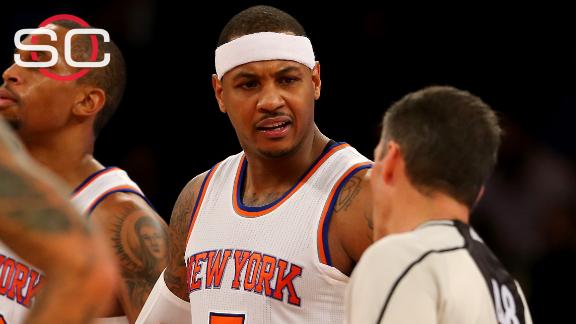 Carmelo Anthony says he's frustrated by a lack of calls from referees this season.

"I always get fouled. That's what's frustrating me. You play so hard, work so hard and don't benefit from that," Anthony told reporters after the Knicks' shootaround in Utah on Wednesday. "You look at other guys -- you touch them and look at them wrong and get fouls. It's a frustrating thing for me as a guy who likes to go to the basket, play in the paint. I like to play physical. It's frustrating.

"I'm human. Those frustrations kick in at times, especially when you're down there banging and know you're getting banged on," added Anthony, who received a technical for arguing with a referee over a non-call on Monday. "I don't know what else to do. I don't know how to play another way."

Anthony said on Wednesday that referees have told him that they have a difficult time making calls when he initiates contact.

Anthony is scoring 20.6 percent of his points off of free throws over the past two seasons (22.8 this season), down from his career average of 24.7 entering that stretch, according to ESPN Stats & Information.

Information from ESPN's Ian Begley and ESPN Stats & Information was used in this report.