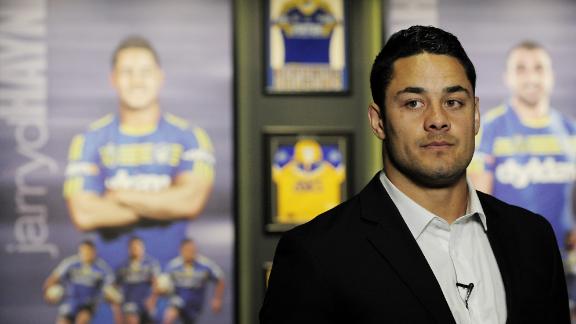 "Our scout Down Under has been on this for some time now," Carroll joked. "But he's an incredible athlete and a great competitor, so we'll see where it goes. I'm afraid to mention anything because I'm not sure of the rights things and contract issues down there. We'll leave that up to [Seahawks general manager] John [Schneider] to figure out."

Hayne, 26, announced earlier this week that he is retiring from the National Rugby League to pursue a career in the NFL. He made a visit to Seattle in September, making an appearance at the Seahawks' facility after meeting University of Washington coach Chris Petersen at Husky Stadium.

Carroll said he did not meet Hayne when the rugby star visited the Virginia Mason Athletic Center. When asked specifically about Hayne, Carroll was a bit coy.

"I don't think I'm able to talk about that," Carroll said. "We couldn't talk about a player on another [NFL] team, so I don't want to mess it up. But it's a pretty exciting thought.

"I've always thought it would be cool to recruit down [in Australia] and all that because there are some great players, and it's a great game. It's a very physical and demanding game, so those guys have all the same stuff we're looking for in our guys."

The Seahawks' interest appears serious enough that a television station from Australia sent one of its reporters (Los Angeles-based Michael Best) to Seattle on Wednesday to ask Carroll about Hayne.

Carroll was willing to talk about rugby players in general.

"They're great athletes," Carroll said. "They run fast, and they hit hard. The style of throwing and catching is different. I'm sure our guys could cross over, too, once they figured out how to lateral and kick it on the run. Well, we'd be miserable at that, I'm sure. But there's a lot of general carryover because of running and tackling and making people miss."

During a news conference in Sydney earlier Wednesday, Hayne did not identify which NFL clubs -- if any -- were interested in offering him a tryout.

Hayne said if he was unsuccessful in his bid to break into the NFL and returned to the rugby league, he'd rejoin the Parramatta NRL club. Renowned for his acceleration and counter-attacking prowess in rugby, Hayne said he believes he has the skills to make it as either a punt returner or kick returner.

"I think it would be really hard and a tremendous challenge," Carroll said. "Only a certain few could do it. There would need to be a lot of patience from the [NFL team involved]. I don't think a guy could come in in the middle of a season. I think it would take more time than that. But we've seen guys over the years who have made the transition from other sports."

Seahawks cornerback Richard Sherman also was asked if Hayne could do it.

"It depends on what position he is trying to play," Sherman said. "If he can adjust and grasp the strategic part of the game, I think he would do fine. That's to be seen."

And could Sherman play rugby?

"I don't know," Sherman said. "I don't really know the rules to rugby, but I think I'd do all right."