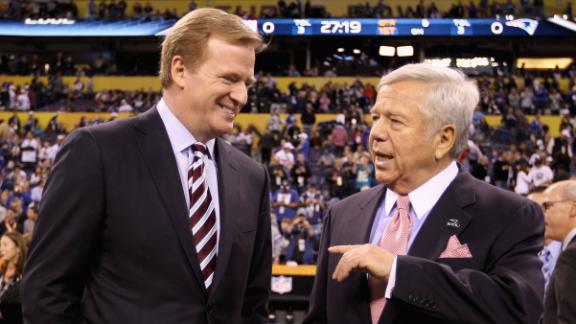 Sunday, shortly after the Seahawks' arrival in Arizona, Sherman said he didn't believe the Patriots would be punished if they were found to have adjusted the air pressure in 11 footballs prior to last Sunday's AFC Championship Game.

Sherman cited a photograph that included Goodell and Kraft from a party at Kraft's house the night before the AFC Championship Game, a photo that was then posted to the Patriots' official Twitter account:

"Will they be punished? Probably not," Sherman said. "Not as long as Robert Kraft and Roger Goodell are still taking pictures at their respective homes. You talk about conflict of interest. As long as that happens, it won't affect them at all. Nothing will stop them."

Carroll was asked Monday if he would speak to Sherman about that comment and whether or not he believed Sherman has correctly described the relationship between Kraft and Goodell.

"Well, first off I think they were on the air, he said them out loud," Carroll said at the Arizona Grand Resort. "So, that is what he said. Richard has an outlook that Richard owns. And he had opinion about something. I don't think he knows the commissioner and Mr. Kraft very well, I don't think they have a long-standing relationship. But he has an opinion and he expressed it."

Carroll added that while he would speak to Sherman about the assessment, he didn't believe it would alter Sherman's outlook on the matter.

"Whether I talk to him or not, he's still going to have his opinion," Carroll said. "And we actually talk about most everything that is spoken, eventually that'll come up. We won't share with you how that comes out and all, but we will talk about stuff. We always have."

Then asked if he believed Sherman was correct Carroll chuckled and said: "I don't know that, it's Richard's opinion, that's the easy part of all this."

Carroll was also asked about how he would deal with running back Marshawn Lynch, who has been fined for obscene gestures he made during games this season as well as not fulfilling the league's media policy.

"You'll never know that," Carroll responded to how he would deal with Lynch this week. "I will never answer that question, sorry. We're just going to talk as we would to make sure everything that comes into this game will be in line with how we want to go about the game. I'll just tell you it's no different than when I talk to other players about other issues ... pretty typical for us to address that ... We have a great understanding on our team that allows us to talk about what we need to talk about. But I'll say this and I'll say it again, we still celebrated the uniqueness of our players."