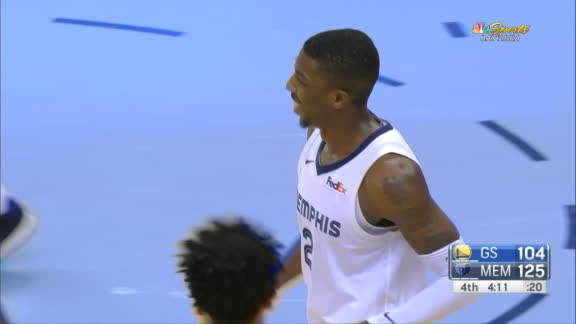 MEMPHIS, Tenn. -- Jevon Carter scored a career-high 32 points, Justin Holiday added 22 and the Memphis Grizzlies beat the Golden State Warriors 132-117 Wednesday night in the regular-season finale for both teams in a game featuring plenty of reserves.

Kevin Durant led the Warriors with 21 points, while Klay Thompson finished with 19. Durant and Thompson, who sat out Tuesday's win at New Orleans, were the only Golden State starters to play. Both saw action only in the first half.

Golden State entered the game with its playoff position set atop of the Western Conference and sat most of its stars, either by plan or as a bit of a precaution after Stephen Curry tweaked his ankle in Tuesday night's win at New Orleans. Curry, along with Draymond Green, DeMarcus Cousins and Shaun Livingston, took Wednesday night off.

That left bench players for both teams to close out the season in a run-and-gun, minimal-defense affair.

Memphis shot 62% in the first half and carried an 86-68 led into the break. The Grizzlies' 86 points set a franchise record for a half.

Warriors: A 3-pointer by Jacob Evans III in the first quarter was the fourth of the game, setting a franchise record for 3-pointers in a season. The previous record of 1,077 was set in 2015-16 . ... Quinn Cook's 3-pointer near the midway point of the first quarter put him past 500 points for the season. ... Durant was whistled for a technical in the first quarter -- his 16th of the season. Under NBA rules, a player is suspended one game after the 16th. However, Warriors officials said the rule doesn't carry over from the regular season into the postseason.

Grizzlies: The 45 points in the first quarter were a season high for any period this season and only one less than the franchise record set against the Los Angeles Lakers Jan. 9, 2007. ... Carter's previous high this season was 15 points on March 2 at Dallas. ... Wright's third triple-double moved him to second place on the franchise list behind Marc Gasol, who had five.

Warriors: Open the postseason this weekend.