Cashman: CC Sabathia out until July 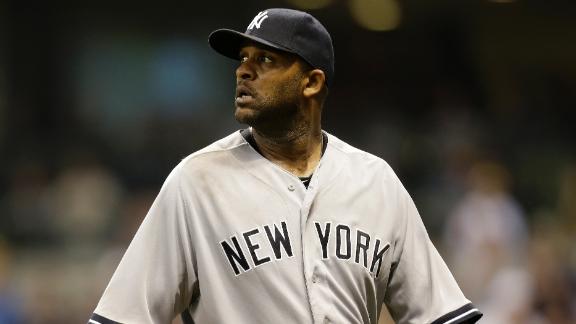 NEW YORK -- New York Yankees pitcher CC Sabathia's knee injury is likely to keep him out of action until July 1 and possibly longer, according to general manager Brian Cashman.

Speaking on ESPN The Magazine's Buster Olney's podcast, Cashman said Sabathia has some breakdown of cartilage in his right knee, which caused the pain, swelling and fluid buildup that sent him to the disabled list on May 11, the day after he allowed three long home runs in a 5-4 loss to the Milwaukee Brewers.

Sabathia visited noted orthopedic surgeon James Andrews last week and was given a stem-cell injection in his knee, a painful procedure that left the 33-year-old left-hander on crutches.

"It's an unpredictable time frame," Cashman said. "I'd say you're talking at least six weeks until you see him on a major league mound again."

Cashman said Sabathia would need to keep weight off his knee for a period of time and would begin with exercises in a pool to reduce the strain on his knee. He would gradually progress through strengthening exercises and eventually a return to pitching.

But Cashman cautioned that even a return in six weeks, or around July 1, might be overly optimistic.

"If we predict anything before six weeks, then we're probably setting ourselves up for disappointment," Cashman said.

In the meantime, the Yankees have been going with a makeshift rotation anchored by rookie Masahiro Tanaka, who is 6-0 with a 2.17 ERA; veteran right-hander Hiroki Kuroda, who is 39 years old; and a trio of unproven starters -- right-hander David Phelps, left-hander Vidal Nuno and right-hander Chase Whitley, who made his major league debut Thursday against the Mets and will start Wednesday night against the Cubs in Chicago.

Michael Pineda won the No. 5 starter's job in spring training and pitched extremely well (2-2, 1.83 ERA) before being suspended for 10 days for using pine tar on the ball during a start against the Red Sox on April 23, after which he went on the DL with a strained back muscle. His return is still approximately three weeks away.

Cashman said he did not anticipate making a trade to shore up the rotation until after this year's June 5 draft.

"I personally believe it's virtually impossible to get anything done of significance prior to the draft," he said. "And it seems to be even harder this year because of the scarcity of talent. That's why when you break spring training, you want to stay as healthy as possible until the draft because your flexibility only comes from within, and you hope your depth as an organization will allow you to tread water better."

Despite all their injuries -- the Yankees also have outfielder Carlos Beltran on the DL with inflammation in his right elbow caused by a bone spur, an injury that may require surgery -- the Yankees have stayed afloat in the AL East, where many of the teams have been hit by the injury bug.

At the start of play Monday, the Yankees (23-20) led the division by a half-game over the Orioles, with the Blue Jays in third, a game back, and the Red Sox in fourth, three games behind.

"The AL East is as tough as they get," Cashman said. "All the teams in the division have a great deal of talent and have dealt with a great deal of injuries. We're all still bunched together. It's a constant battleground as managers, general managers try to move the chess pieces to stay in the race."