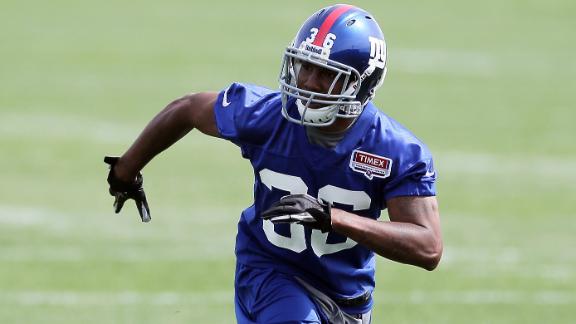 EAST RUTHERFORD, N.J. -- New York Giants safety and team captain Antrel Rolle wondered aloud Thursday why his teammates aren't doing what they need to do to stay out of trouble in the wake of the drug suspensions to cornerback Jayron Hosley and now-former teammate Will Hill.

"It's too easy to do right to keep doing wrong," Rolle said on the topic of two members of the Giants' secondary receiving drug suspensions in the course of a week. "We don't need to have that pub, people asking, 'What's up with the secondary?' That's a bad reflection. It doesn't look good."

On Friday, the league announced that Hill would be suspended for the first six games of the season for violating the substance-abuse policy. It's Hill's third drug suspension in three years, and on Monday the Giants waived him, sick of his inability to avoid suspensions even as they supported him through his continued off-field troubles.

"When you run a business, you have to be able to rely on people to be there when you need them to perform their duties," Coughlin said, explaining the decision to let Hill go. "If this is your job, and if you're willing to jeopardize your job for some other reason, then perhaps you don't have your mind where it's supposed to be in the first place. This organization helps in any way we possibly can."

"Will knew the situation he put the Giants in, and he forced their hand," Rolle said. "You can't really count on Will being able to help us out if he's being suspended repeatedly, season after season."

On Wednesday, the league announced that Hosley, the Giants' 2012 third-round pick, would be suspended for the first four games of the season for his violation of the drug policy. Hosley said he tested positive last season and has been appealing since then, but "the ball didn't bounce my way."

"I want to apologize to the ownership of the New York Giants, the general manager Jerry Reese, my coaches and most importantly my teammates and the fans," Hosley said after organized team activities practice Thursday. "I made a mistake, and there's consequences to what you do, and I've got to be man enough to face them and move on."

Hosley is allowed to practice with the team and participate in preseason games. Once the season starts, he will have to stay away from the team facility until Sept. 26, which is the day after the Giants' Week 4 game against the Redskins.

And that's assuming he makes the team. Hosley's spot was already tenuous after the Giants signed four free-agent cornerbacks and drafted one in the sixth round. He knows he didn't help himself by getting suspended.

"They've got to make the proper move for the team," Hosley said. "There's consequences for everything, and from this point on, I'm working my way back up."

Hill's departure is likely the greater on-field loss, both because he's the better player and because the Giants aren't as deep at safety as they are at cornerback. Stevie Brown, who projected to be a starter this time last year, is recovering from ACL surgery and will be brought along somewhat slowly. Other safeties on the roster include free-agent signee Quintin Demps, 2013 fifth-rounder Cooper Taylor and 2014 fifth-rounder Nat Berhe. Demps was signed primarily as a kick returner, but he's likely to see some more time on defense now that Hill is out of the picture.

In the meantime, the Giants hope that the suspensions of Hill and Hosley remain isolated incidents and don't portend some sort of larger culture problem within the team.

"I don't feel anything needs to be said," Rolle said. "Every individual has to be accountable for his own actions."