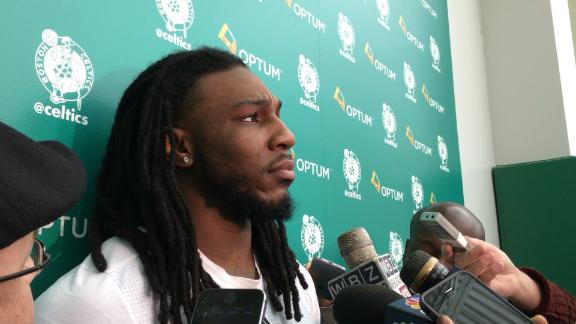 WALTHAM, Mass. --Boston Celtics swingman Jae Crowder, whose 2014-15 season ended when he sprained his left ACL after a vicious backhand from Cleveland Cavaliers guard J.R. Smith in Game 4 of an Eastern Conference playoff series, said on the eve of the teams' first meeting since the injury that he expects an apology from Smith.

"I hope he apologizes [Tuesday], to be honest with you," said Crowder, who avoided surgery but spent the early part of his offseason rehabbing the injury that occurred as he fell to the court. Smith was ejected and suspended for two games for the incident, but has apparently not apologized to Crowder.

Added Crowder: "I hope it wasn't intentional. But if he doesn't [apologize], then we'll play ball."

When asked if Smith delivered a cheap shot, Crowder repeated himself.

"I hope he apologizes tomorrow," Crowder said. "But if he doesn't, we'll play ball."

Also in that game, Kevin Love's season ended when he got tangled with Kelly Olynyk chasing a rebound.

The Cavaliers swept Boston out of the playoffs in four games. Crowder was ready for the start of this season and has been key to helping Boston to a 14-10 start.

"Luckily nothing happened [that needed to] be surgically repaired," Crowder said. "I was just able to get back on the court at the beginning of this year and work with my team to achieve a goal, and that's to get back where we were last year.

Olynyk has become persona non grata in Cleveland after ending Love's season. The third-year big man said he reached out to Love in the aftermath and believes there are no lingering bad feelings.

"I apologized to [Love]," Olynyk said. "He texted me back. So I think we're all right right now."

Celtics coach Brad Stevens isn't sure if any bad blood will carry over between seasons, noting that playoff basketball often brings an uptick in intensity.

"Last year was last year," Stevens said. "I don't know how guys on either side feel about it. I think, obviously Love's injury was really unfortunate. We all know Kelly and we all know that he didn't intend to hurt him. We were really fortunate that Jae, when he went down, didn't have anything more serious than he had. But the game can get competitive. But it's a new season for us and we're focused on trying to play our best basketball."