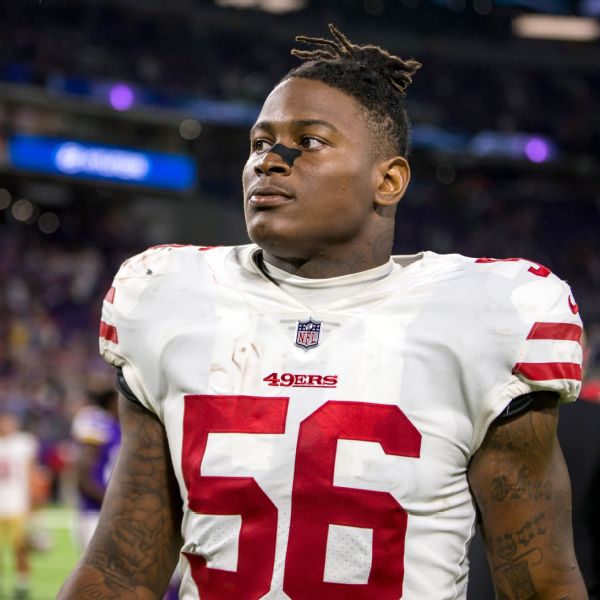 As the San Francisco 49ers and linebacker Reuben Foster await word from the Santa Clara County District Attorney's office about possible charges against Foster, Niners CEO Jed York made it clear Wednesday that Foster's future with the team will depend on his ability to avoid future trouble.

"We'd love Reuben to be on this team," York told NBC Sports Bay Area at the owners meetings in Orlando, Florida. "And we'd love him to participate for us. But if he's not doing things off the field that allow us to be able to rely on him -- or he's doing something that we're not comfortable with off the field and it's proven that's what's going on -- I think the guys have said then you're just going to have to move on."

Foster was arrested on Feb. 11 in Los Gatos, California, on suspicion of domestic violence, threats and possession of an assault weapon. As of Wednesday afternoon, the district attorney's office has yet to make a decision about whether to pursue charges against Foster.

The 49ers have not been in a hurry to make a decision about Foster until the legal process plays out. They don't have any team activities scheduled until April 16, when they open their offseason program in Santa Clara.

York told NBC Sports Bay Area that he has not talked to Foster about either of his offseason arrests -- he was also arrested for misdemeanor marijuana possession on Jan. 12 in Tuscaloosa, Alabama -- but he has had conversations with general manager John Lynch and coach Kyle Shanahan about their dealings with Foster.

"From my conversations with John and Kyle, I know Reuben is very cognizant of where his position is right now, and his time with the 49ers could potentially be over if he continues to do things outside of the team that aren't what we want him to be a part of," York said.

The 49ers took Foster with the No. 31 pick in last year's NFL draft. He went on to finish second on the team in tackles, with 72 in 10 games. That came after Foster raised some red flags at the 2017 NFL scouting combine; he was sent home early after he got into an argument with a hospital worker and his urine sample showed up as diluted, which, according to the NFL's policy on substances of abuse, was treated as a positive test.

Foster played his first season in the league without an off-field incident, but the two arrests in less than a month raised concerns about his ability to avoid trouble when outside the structure of the team and the season.

"We have to wait until [a decision from the DA's office] happens, but that will obviously be something that we get together and discuss whatever comes down when those issues come up, and figure out where we move from there."
Report a correction or typo
Related topics:
sportsespnsan francisco 49ersnflreuben foster
Copyright © 2022 ESPN Internet Ventures. All rights reserved.
TOP STORIES
Person of interest taken into custody after 6 killed in IL shooting
Highland Park parade shooting victims range in age from 8 to 85
LIST: Bay Area 4th of July events
2 police officers shot during July 4th festivities in Philadelphia
Experts call for new COVID vaccine, set expectations for efficacy
Feelings of gratitude, anger this Fourth of July
Joey Chestnut, Miki Sudo win Nathan's Hot Dog Eating Contest
Show More
Search underway for 3 men missing in Sacramento Delta: Officials
1 dead, 4 injured in shooting in downtown Sacramento, police say
Travel trouble with flights, gas prices continues this 4th of July
July 4th: Firefighters warn about dangers of illegal fireworks
SF couple gets $1,500 fine for parking in their driveway
More TOP STORIES News