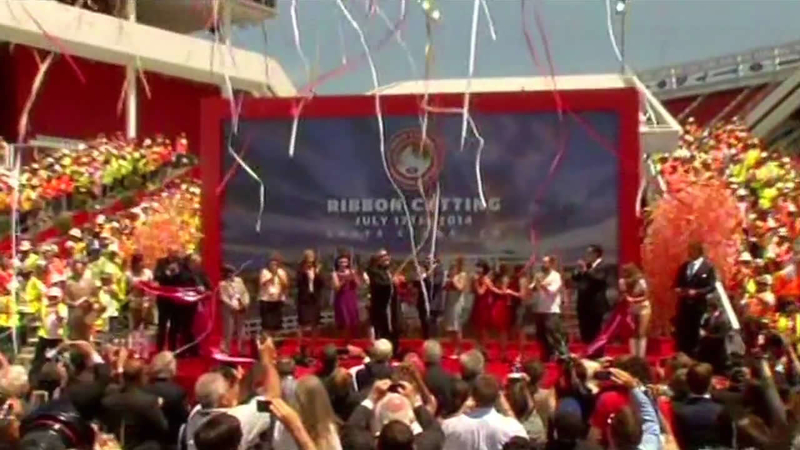 SANTA CLARA, Calif. -- The chief executive of the San Francisco 49ers, team head coach Jim Harbaugh and other dignitaries cut ribbons Thursday in a ceremony marking the opening of the $1.3 billion Levi's Stadium in Santa Clara after 27 months of construction.

The 68,500-seat stadium will have free WiFi throughout for fans, two 200-foot-wide HD TV screens, 10 members-only clubs and a mobile app to guide fans to their parking spaces and show them the wait times at stadium restrooms.

Hundreds of invited guests, including local and state elected officials, stadium construction workers and 30 49ers cheerleaders, were present at the ribbon cutting outside a red-carpeted front stairwell to the stadium facing the nearby Great America Amusement Park. 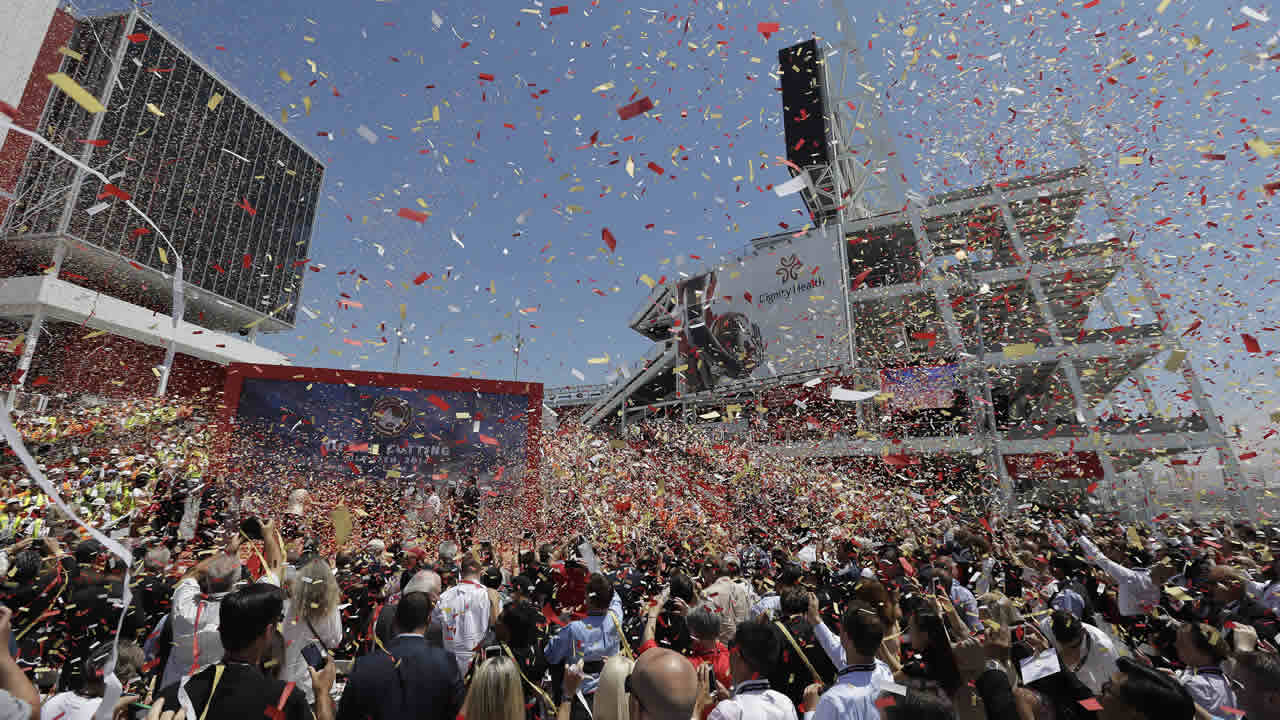 49ers president and chief executive officer Jed York, Harbaugh, Santa Clara Mayor Jamie Matthews and others helped cut three ribbons before guests walked up the steps to the mezzanine for a peek at the football field and a reception in the United Club Lounge.

York recalled during the ceremony when former Santa Clara City Council member Kevin Moore first suggested the 49ers move to the city about seven years ago.

A succession of city leaders and employees then forged a deal that led to the stadium's construction and completion, York said.

"There are so many people who worked on this project from an elected standpoint," York said. "It's amazing and mind-boggling how much time and energy they put into this."

Roger Goodell, commissioner of the National Football League, said that it was not unusual for San Francisco's NFL team to move 45 miles south to Santa Clara to play its games, as the New York Giants and Jets have been playing at a stadium in East Rutherford, New Jersey for years.

"This is still the Bay Area and still the 49ers' team," Goodell said. "This is the region's team and nothing has changed."

Prior to the ceremony, a lone lawnmower operator drove on the stadium's unmarked green playing field. Entrances to the stadium, including three large pedestrian bridges topped by solar panels, carried names of company sponsors such as Toyota and Dignity Health.

The 49ers have packed the new venue with technology to enhance the experience of fans bringing their tablets and smart phones to games. The team's owners installed 400 miles of data cable, 12,000 network ports and 40Gb/s of bandwidth.

A 40-person production team will oversee 13 stadium cameras for in-stadium broadcasts during games allowing for six replays per play. Levi's also will be equipped with 10 Sony cameras capturing video in 4K, a new 4000-pixel resolution level.

The 49ers are also seeking to have Levi's become the first NFL stadium with a LEED Gold certification for saving energy, water and other resources. Some 38,000 square feet of solar panels have been installed for year-round collection of energy.

The construction of Levi's, the first football stadium built for NFL football in California since 1967, began in April 2012. The 49ers played their final game at the team's former home, Candlestick Park in San Francisco - built for pro baseball in 1960 and expanded for football in 1969 - last Dec. 23.

The 49ers first game at Levi's will be a pre-season contest against the Denver Broncos on Aug. 17. The stadium's inaugural sports game will be a soccer match pitting the San Jose Earthquakes and Seattle Sounders FC on Aug. 2.

Levi's, named after San Francisco-based clothing firm Levi Strauss & Co., which paid the 49ers for naming rights, was selected by NFL team owners as the site of the Super Bowl NFL championship game set for Feb. 2, 2016.

Matthews said that near-term and future growth for the city near the stadium would be in the billions of dollars.

There is currently $6.7 billion worth of private money invested in developments within a 15-minute walk of Levi's and a huge proposed mixed-use project across from the stadium is estimated to cost another $6.5 billion to build, Matthews said.

City councils and policy makers in Santa Clara had previousy identified the area close to Tasman Drive and Great America Parkway as an arts and entertainment district and tried and failed to bring the San Francisco Giants and Oakland A's baseball teams and San Jose Earthquakes soccer teams there.

"It's always been envisioned as a place that will be a destination," he said. "And you know, we've been through a lot."

The city prepared the area for transportation with six-lane wide streets, the Santa Clara Valley Transportation Authority's light rail line to the stadium that is linked to Caltrains' heavy rail train stop in Mountain View and to serve as a connection to BART's planned Milpitas station.

The 49ers paid to widen VTA's platform for a light rail stop to drop fans off beside Levi's from San Jose and other parts of Santa Clara County, he said.

"We have the infrastructure no one else has," he said. "More than 100,000 people come into his area every day just to work. They move in and out seamlessly. You have to realize we have more than a dozen freeway and expressway entrances."

As for parking around Levi's, the city has access to 32,000 spaces, including 15,000 spaces it controls and 17,000 under contract, to accommodate drivers to the stadium, Matthews said.

But Matthews said that he is unsure just what will happen before fans start to head for Levi's.